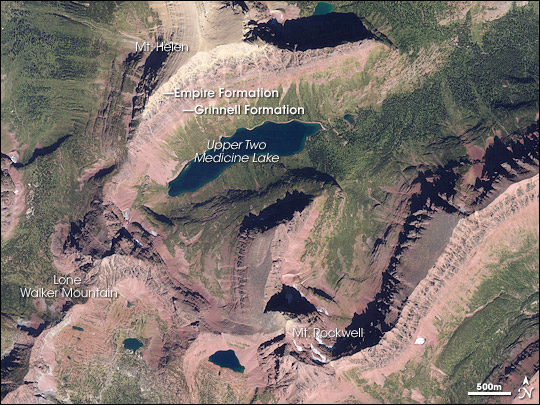 Above the Grinnell Formation, visible on the summit of Mt. Helen, lies the tan Empire Formation. The rocks of both the Grinnell and Empire formations are Precambrian in age—they formed during the Middle Proterozoic Era, more than 1 billion years ago. Despite their great age, the rocks contain fossils, including traces of algae and worm burrows.

Geologically recent events sculpted the rocks of Glacier National Park into sharp mountain peaks and steep-walled valleys. During the last ice age, which lasted from 100,000 to 10,000 years ago, glaciers covered most of northern Montana. These rivers of ice cut into pre-existing streambeds, carving valleys with nearly vertical walls. Later erosion in the walls, primarily due to the freezing and thawing of water in rock crevices, filled the edges of the valleys with sloping piles of rock and sand. This type of erosion results in valleys with a u-shaped cross section. The melting glaciers left behind glacial till—ground up rock—on the valley floor, and numerous glacial lakes, such as Upper Two Medicine Lake, which fill the basins recently occupied by the glaciers.