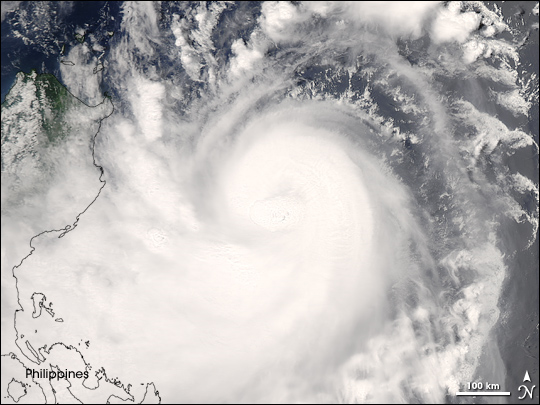 Typhoon Nuri first formed in the western Pacific Ocean well to the east of the Philippines. Gathering strength as it passed over ocean waters and traveled west, the storm system reached typhoon status on August 18, 2008. As of August 19, the typhoon was gaining power, reaching Category 2 strength as of 2 p.m. local time (06:00 UTC), according to the Joint Typhoon Warning Center. The typhoon was still offshore of Luzon, the northernmost island in the Philippine Islands chain. It was forecast to graze that island as it continued westward then head north as it traveled across the South China Sea to come ashore in southern China on August 21. Forecasts on August 19 were that the storm might reach Category 3 strength prior to landfall.

The Moderate Resolution Imaging Spectroradiometer (MODIS) on NASA’s Aqua satellite captured this photo-like image of the storm at 12:40 p.m. local time (4:40 UTC) on August 19, 2008. This image shows Typhoon Nuri off the coast of Luzon at the northern end of the Philippines; it appears as a tightly wound ball of clouds with hints of heavy thunderstorms near the storm’s center. (More energetic thunderstorms tend to sprout tall cloud towers above them, casting shadows on the clouds below. The eye of the storm is not distinct in this MODIS image, though a cloud-filled eye is apparent. Around the time MODIS acquired this image, Nuri showed measured wind speeds of 165 kilometers (105 miles) per hour, consistent with a Category 2 Typhoon, according to the Joint Typhoon Warning Center.