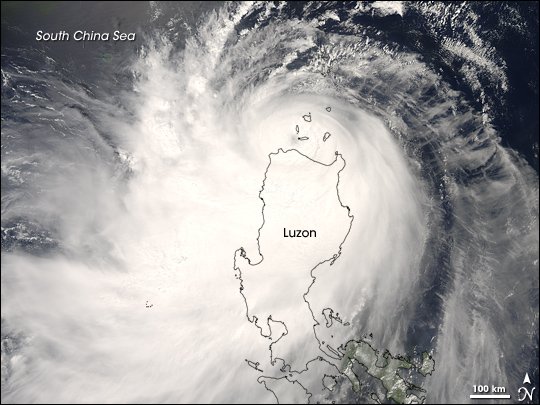 After forming off the coast of the Philippines, Typhoon Nuri traveled westward toward the island chain, gathering strength as it approached Luzon, the main island at the northern end of the Philippines. On August 19, 2008, with reported wind speeds up to 140 kilometers (87 miles) per hour, the typhoon’s eye clipped the northern edge of Luzon before continuing westward into the South China Sea. Though the eye of the storm only briefly touched Luzon, authorities put much of the island under alert, according to the Associated Press. Heavy storm bands surrounding the eye covered a large area, and Luzon is dominated by steep volcanic mountains prone to flash floods and mudslides.

The Moderate Resolution Imaging Spectroradiometer (MODIS) on NASA’s Aqua satellite captured this photo-like image of the storm at 1:20 p.m. local time (5:20 UTC) on August 20, 2008. By the time MODIS acquired this image, Typhoon Nuri was pulling away from Luzon. The Joint Typhoon Warning Center reported that Nuri had reached Category 2 strength, with sustained winds of 175 kilometers (110 miles) per hour. Forecasters were calling for Nuri to reach Category 3 status by August 21, before coming ashore on the Chinese mainland near Guangdong and Hong Kong.