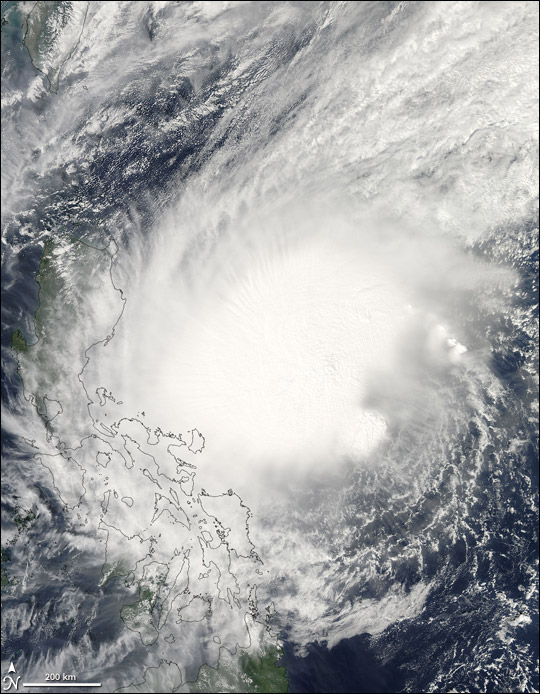 Typhoon Bolaven took most of a week to build to typhoon strength as it churned slowly across the Philippine Sea between November 13 and November 18, 2005. The storm had been a Category 1 typhoon for just over 24 hours when the Moderate Resolution Imaging Spectroradiometer (MODIS) on NASA’s Aqua satellite captured this image. At the time, Bolaven had winds of 120 kilometers per hour (75 miles per hour) with gusts to 150 km/hr (90 mph), only just qualifying to be called a typhoon. The storm was forecast to strengthen slightly before coming ashore over the Philippines on November 19.

As a weak Category 1 storm, Bolaven lacks a distinct eye, but it does have the circular shape of a tropical cyclone. The outer bands of the storm were already moving over Luzon, the largest island in the Philippines, when MODIS took this image. The large image provided above is at MODIS’ maximum resolution of 250 meters per pixel. The image is available in multiple resolutions from the MODIS Rapid Response Team.