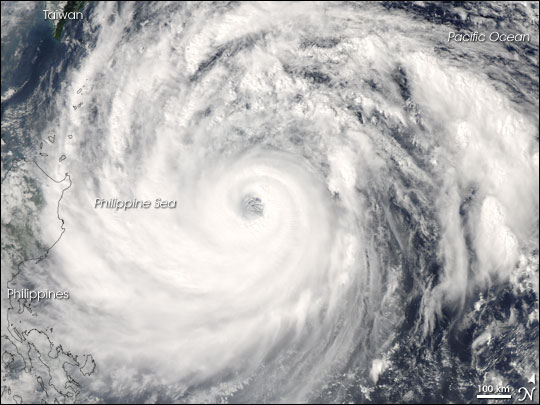 Typhoon Krosa was a powerful tropical storm (the generic name for typhoons, hurricanes, and cyclones) on the morning of October 4, 2007. With sustained winds of over 210 kilometers per hour (130 miles per hour), it was just at the crest of being classified a Category 4 Super Typhoon when NASA’s Aqua satellite flew over Krosa in the afternoon. The storm had been intensifying over the northeastern Philippine Sea for several days, and was expected, as of October 4, to head towards northern Taiwan and the Chinese mainland coast.

The Moderate Resolution Imaging Spectroradiometer (MODIS) on NASA’s Aqua satellite acquired this photo-like image at 12:40 p.m. local time (4:40 UTC) on October 4, 2007. A sprawling system with tightly wound spiral arms and a large but cloud-filled (“closed”) eye, Krosa bore all the hallmarks of a large and powerful typhoon. Although the storm was observed by MODIS to be brushing up against the Philippines, it was not projected to pass over the islands. The outer bands of the storm will certainly bring rains to Luzon, the northernmost island in the Philippine chain.

You can also download a 250-meter-resolution KMZ file of Typhoon Krosa suitable for use with Google Earth.

Typhoon Krosa initially formed over the western Pacific Ocean on October 1. The Joint Typhoon Warning Center predicted that the storm would grow into a powerful typhoon as it moved towards the China coast.