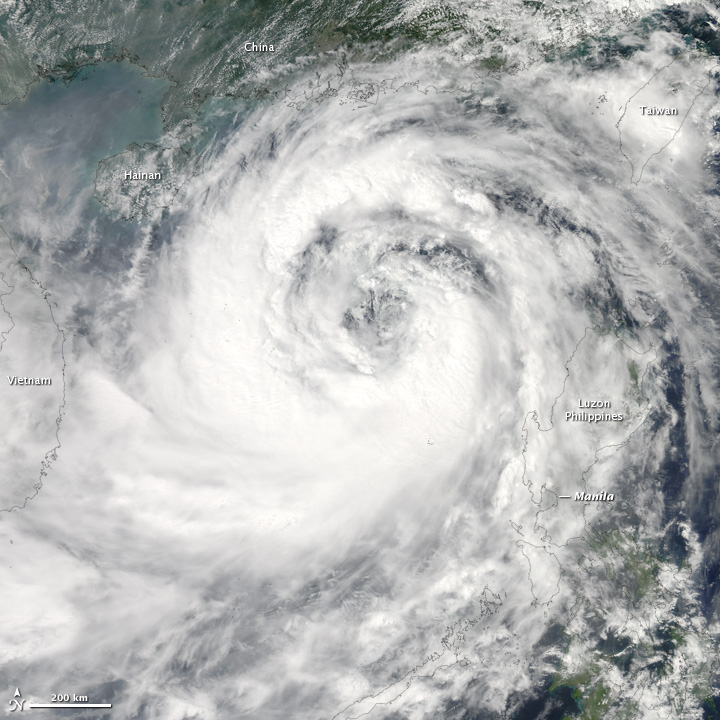 Typhoon Nesat sprawled across most of the South China Sea on the afternoon of September 28, 2011, when the Moderate Resolution Imaging Spectroradiometer (MODIS) on the Aqua satellite acquired this image. Bands of clouds spiral loosely around the center of a storm weakened by its encounter with mountainous Luzon, the largest island in the Philippines. When MODIS took this image at 1:35 p.m. local time, Nesat had winds of 65 knots (120 kilometers per hour or 75 miles per hour), making it a weak Category 1 storm on the Saffir-Simpson Hurricane Wind Scale.

Nesat is forecast to maintain its current intensity or strengthen slightly as it moves northwest toward the Chinese island of Hainan and then Vietnam. Nesat reached its peak intensity in the hours before making landfall over the Philippines on September 27. At that time, Nesat was a Category 3 storm with winds of 105 knots (194 km/hr or 121 mph) according to the Joint Typhoon Warning Center.

Nesat drenched Luzon with heavy rains on September 27 and 28, causing widespread flooding. The floods and storm damage caused 33 deaths, with 41 people missing, said local news reports on September 29. Many of the deaths occurred in and around Manila, which flooded from both the storm surge and from rain-swollen rivers. Nearly 350,000 people were affected by the typhoon in the Philippines.

The floods also damaged infrastructure and agriculture. The storm hit key crop regions and an estimated 33,890 tons of rice were lost, said local news reports. Both China and Vietnam were preparing for strong winds and heavy rain as the storm approached.

A second storm, Typhoon Nalgae, is forecast to strike northern Luzon on October 1.

Typhoon Nesat formed in the western Pacific Ocean on September 23. It caused extensive damage in the Philippines on September 27-28 before moving towards southern China and Vietnam. 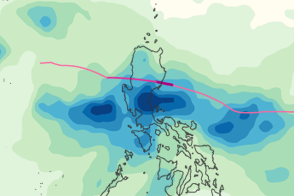