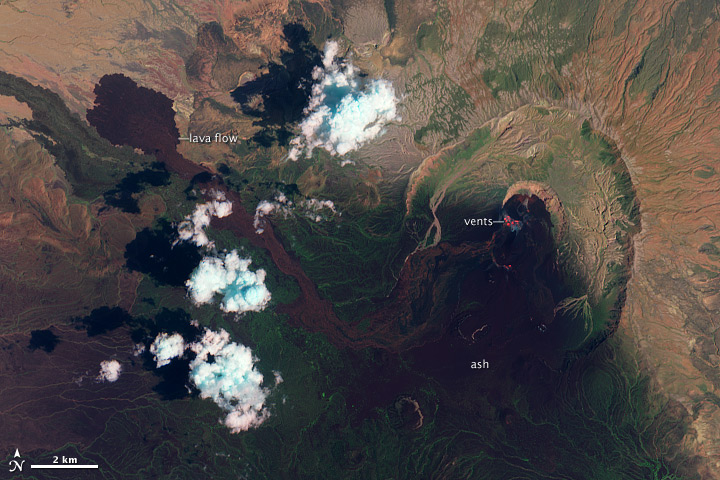 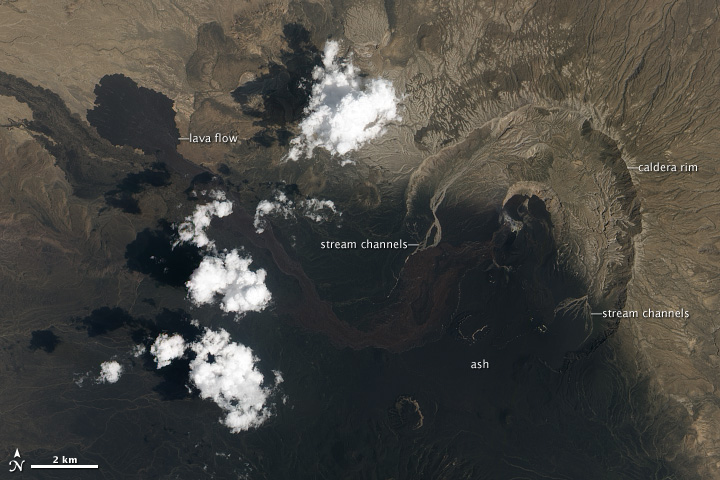 Satellite imagery suggests that the eruption of Nabro Volcano, which began in June 2011, continues. The volcano is located on the edge of the Danakil Desert, a remote and sparsely populated area on the border between Eritrea and Ethiopia, and few eyewitness accounts of the eruption are available. Orbiting instruments such as the Advanced Land Imager (ALI) aboard Earth Observing-1 (EO-1), which acquired these images, may be the only reliable way to monitor Nabro.

The images show the volcano in false-color (top) and natural-color (lower) on September 28, 2011. Heat from vents in Nabro’s central crater is visible as a red glow in the false-color image. Another hotspot about 1,300 meters (4,600 feet) south of the vents reveals an active lava flow. A pale halo surrounding the vents indicates the presence of a tenuous volcanic plume. South of Nabro’s crater, the dark, nearly black areas are coated with ash so thick it completely covers the sparse vegetation. On either side of this region is a thinner layer of ash with some bright green vegetation (exaggerated in false-color) poking through.

In the natural-color image, the arid landscape is light brown where it is not covered by ash. The ash is black, while a fresh lava flow, spewed out in the last two weeks of June, is dark brown. More fresh lava flows surround the active vents. On either side of Nabro’s caldera, ephemeral streams have washed away the ash, leaving light-colored channels behind—a first sign of the erosion that will reshape, and eventually remove, what the eruption built.