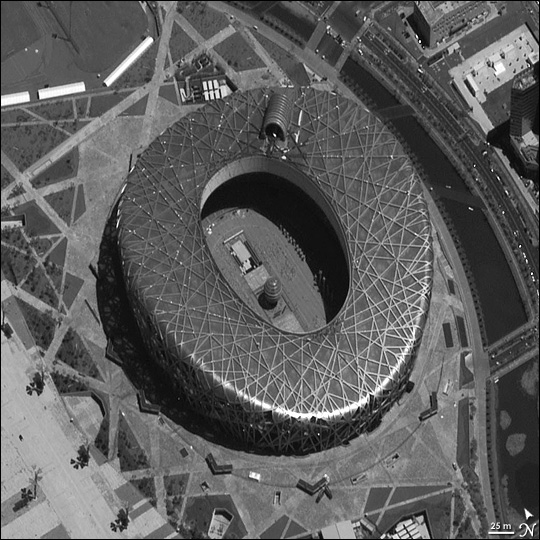 Known as the “Bird’s Nest” for its unique architecture, the Beijing National Stadium is the iconic center point of the Beijing 2008 Olympic Games. The elliptical stadium holds 91,000 people and will host the opening and closing ceremonies, all track and field events, and soccer finals from August 8 through August 24, 2008. DigitalGlobe’s WorldView-1 satellite captured this detailed view of the Bird’s Nest on July 12, 2008, two weeks after the stadium was officially completed and opened.

Resembling twigs in a bird’s nest, 36 kilometers of steel beams provide both structure and form to the building. Clear plastic sheets span the open spaces between the beams to let in light. These spaces are most evident in the lacy structure of the shadow on the west (left) side of the building. The landscaping on the Olympic Green mimics the angles of the Bird’s Nest.

The large image, which includes a wider area, shows the stadium in relation to the rest of Beijing’s Olympic Park. South of the stadium is the Sports Center complex containing the Olympic Sports Center Gymnasium (handball), the Ying Tung Natatorium (water polo, modern pentathlon swimming), and the circular Olympic Sports Center Stadium (modern pentathlon running/equestrian). West of the Bird’s Nest is the luminescent Water Cube, where swimming and diving events will be held. The arch-shaped building north of the Water Cube is the National Indoor Stadium, where handball finals and artistic gymnastics events will occur. The Fencing Hall (fencing, modern pentathlon fencing/shooting) is north of the National Indoor Stadium. 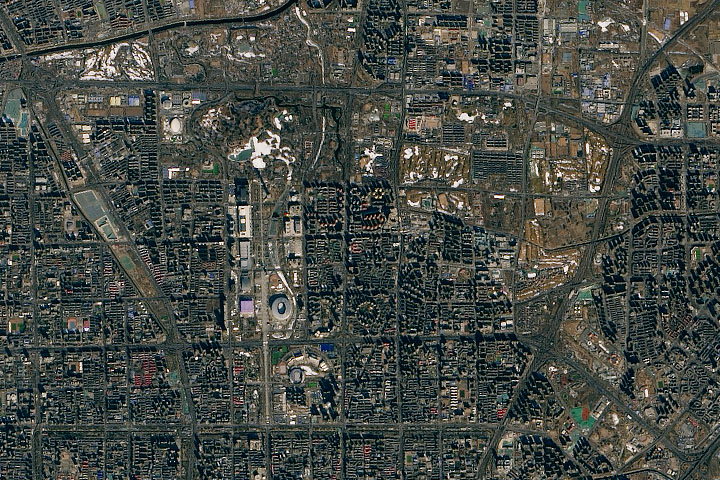