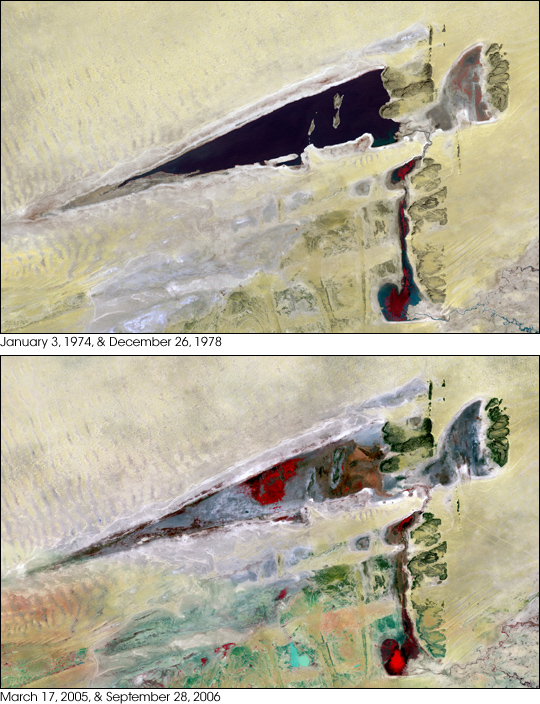 Home to more than 13 million people, Mali stretches from the Sahara Desert in the north to the semiarid grassland known as the Sahel in the south. Just 3.8 percent of the country’s land is arable, and increased use of natural resources combined with prolonged drought have nudged the country toward desertification, according to a report issued by the United Nations Environment Programme.

One example of increasing aridity in Mali appears in Lake Faguibine. These false-color Landsat satellite images of the lake show how it changed over the decades. The top image is made from observations acquired on January 3, 1974, and December 26, 1978. The bottom image is made from observations acquired on March 17, 2005, and September 28, 2006. Made with a combination of visible and infrared light, the images show vegetation as red, water as blue, and bare ground in shades of beige and gray.

Lying at the end of a series of basins watered by the Niger River when it floods, Lake Faguibine has experienced widely fluctuating water levels since the turn of the twentieth century but, at its fullest, has ranked among the largest lakes in West Africa. In 1974, this lake covered roughly 590 square kilometers (230 square miles). Starting in the late 1980s, a drop in precipitation steadily dried the lake. By the late 1990s, the traditional livelihoods of fishing, agriculture, and livestock herding became impractical. Even though normal rainfall resumed after the year 2000, the lake remained nearly dry.

One example of increasing aridity in Mali appears in Lake Faguibine. Starting in the late 1980s, a drop in precipitation steadily dried the lake. Even though normal rainfall resumed after the year 2000, the lake remained nearly dry.