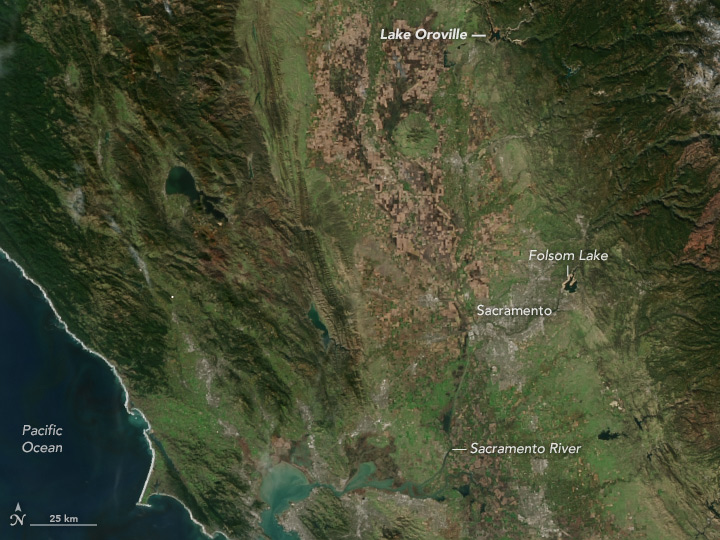 After extreme drought and water shortages plagued California for years, a series of winter storms pushed reservoirs in the Sacramento Valley to the brim in January and February 2017.

Rivers and reservoirs are swollen throughout California. The Visible Infrared Imaging Radiometer Suite (VIIRS) on Suomi NPP captured this natural-color image of sediment-filled waterways in the Sacramento Valley on February 11, 2017. For comparison, the second image shows the same area on November 9, 2016, before the wet weather arrived. Large amounts of water have pooled in the Yolo Bypass, a water storage area designed to minimize flooding in Sacramento. Sediment stirred up during the flooding has turned waterways throughout northern California—including San Pablo Bay and Suisun Bay—a dark shade of brown.

With weather stations in the northern Sierra Nevada recording remarkably high levels of precipitation for the 2016-2017 water year, reservoir levels are well above the historical average in the Sacramento Valley and elsewhere in California. As of February 11, 2017, Lake Oroville stood at 151 percent of the historical average. Folsom Lake was at 144 percent, Lake Shasta was at 138 percent, Don Pedro Reservoir was at 141 percent, and Lake McClure was at 182 percent.

At the Oroville Dam, the situation became dire on February 7, 2017, when a large hole appeared in the main concrete spillway, a part of the dam managers use to release excess water in a controlled fashion. The hole limited how much water authorities could safely release through the spillway, so water levels in the reservoir continued to rise. A few days later, water began flowing over an emergency spillway that has never before been used. When the emergency spillway began showing worrisome signs of erosion on February 12, authorities ordered the evacuation of 188,000 people living downstream.

Lake Oroville’s levels have declined since the evacuation order and the risk of a catastrophic failure has lessened. But reservoir managers remain concerned that rain showers forecast for this week could elevate reservoir water levels and stress the spillways again. As of 11 a.m. on February 13, the evacuation order remained in effect. 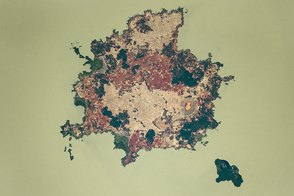