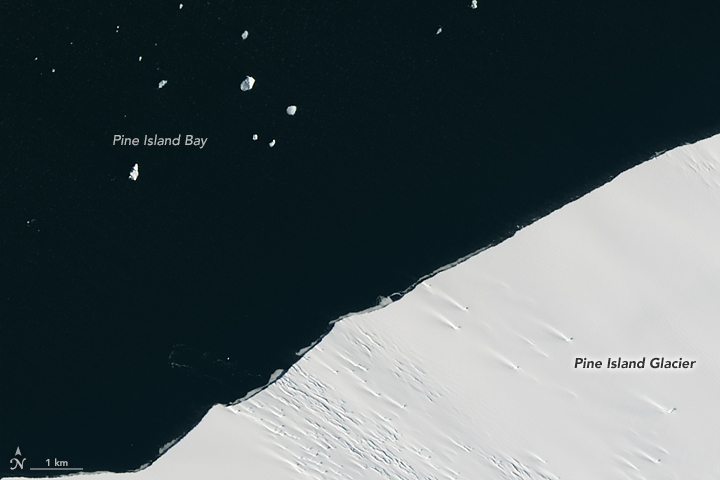 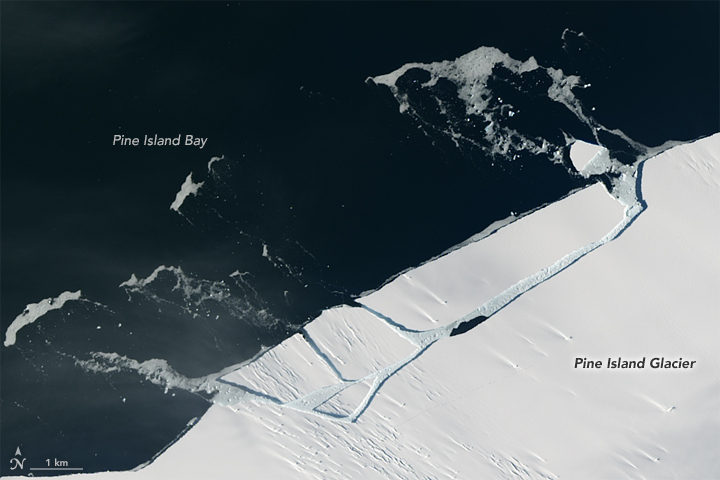 Pine Island Glacier has shed another block of ice into Antarctic waters. The loss was tiny compared to the icebergs that broke off in 2014 and 2015, but the event is further evidence of the ice shelf’s fragility.

Pine Island is one of the main glaciers responsible for moving ice from the interior of the West Antarctic Ice Sheet to the ocean. It already delivers plenty of ice to Pine Island Bay—about 79 cubic kilometers (19 cubic miles) of ice per year. But scientists watch this glacier closely because the evidence has been pointing to even faster loss of ice in the future. Such a retreat would lessen the shelf’s buttressing effect, allowing more inland ice to flow out to the ocean, where it ultimately melts and contributes to sea level rise.

The animation above shows a wider view of the area. The sequence, composed from images acquired January 25–29 by the Moderate Resolution Imaging Spectroradiometer (MODIS) on NASA’s Terra satellite, shows the berg when it first broke and then as it drifts in the bay. According to Ian Howat, a glaciologist at Ohio State University, the event was about 10 times smaller than in July 2015, when a 30-kilometer-long (20-mile) rift developed below the ice surface, then broke through and calved an iceberg spanning 583 square kilometers (225 square miles).

“I think this event is the calving equivalent of an ‘aftershock’ following the much bigger event,” Howat said. “Apparently, there are weaknesses in the ice shelf—just inland of the rift that caused the 2015 calving—that are resulting in these smaller breaks.”

Although not visible in these images, more small rifts persist on Pine Island about 10 kilometers (6 miles) from the ice front. One such rift was photographed on November 4, 2016, during a flight of NASA’s Operation IceBridge—an airborne science mission that makes annual flights over this area. Other rifts are less visible at the surface because they are growing upward from the basal (bottom) side of the shelf. Scientists expect that these rifts will result in more calving in the near future.

“Such ‘rapid fire’ calving does appear to be unusual for this glacier,” Howat said. But the phenomenon “fits into the larger picture of basal crevasses in the center of the ice shelf being eroded by warm ocean water, causing the ice shelf to break from the inside out.”