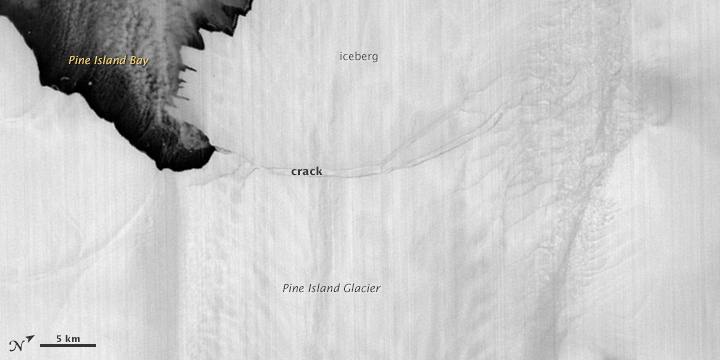 The longest and fastest moving glacier in West Antarctica calved a new iceberg in July 2013. The Advanced Spaceborne Thermal Emission and Reflection Radiometer (ASTER) instrument—built by Japan’s Ministry of Economy, Trade, and Industry for NASA’s Terra satellite—acquired this image of two widening cracks along an edge of the Pine Island Glacier (PIG) in Antarctica. To the west of the cracks—in the image, north is to the upper right—a new 720-square-kilometer (280-square-mile) ice island was formed.

The false-color image above was composed from thermal infrared wavelengths of light because natural-color imagery is not possible during the lightless nights of Antarctic winter. Lighter shades of white and gray are cooler, while darker areas are warmer and typically reveal the cracks and exposed water. The large scene (downloadable beneath the image above) shows the cracking patterns across a broader scale along the coast.

The German Aerospace Center (Deutsches Zentrum fÃ¼r Luft- und Raumfahrt, or DLR) captured a synthetic aperture radar image of the same cracks and ice island on July 8, 2013. German researchers have been examining Pine Island Glacier regularly for years with the TerraSAR-X satellite, which can see the ice through darkness and clouds.

The rift that led to this new ice island was discovered in October 2011 during an instrumented airplane flight in NASA’s annual Operation IceBridge campaign. At the time, the crack was about 24 kilometers (15 miles) long and 50 meters (160 feet) wide. For two years, researchers examined satellite and airborne imagery, as well as data from ice-based instruments, to see when the rift would fully open. In May 2012, they observed the opening of a second crack. And just before the calving this summer, the original rift was roughly 28 kilometers (17 miles) long and 540 meters (1,770 feet) wide.

The ice island is adjacent to some open water in Pine Island Bay and the Amundsen Sea, but it did not appear to move much in the week between the TerraSAR-X and ASTER images. It is unclear whether it will take days, months, or years before the huge iceberg moves out to the sea. Rock and other glacial ice along the horizontal edges could create friction and slow its movement. Winds and sea ice also could press it against the coast.

“It is interesting that the iceberg has not drifted farther from the ice shelf now that it is no longer connected. Being July, there probably is sea ice that is helping to hold the iceberg near shore,” said Robert Bindschadler, an emeritus NASA scientist who has studied Pine Island Glacier for more than a decade. “We were on the ice shelf last December and January, and we left GPS receivers to record ice flow. We will be analyzing those data to see if the ice shelf flow reacted when the iceberg detached.”