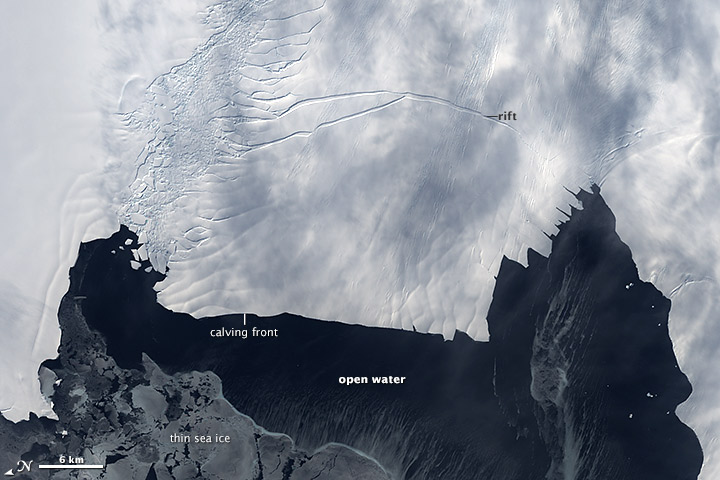 On October 14, 2011, scientists flying over the ice shelf at Antarctica’s Pine Island Glacier (PIG) made a startling discovery: there was a massive rift running across part of the glacier’s floating tongue. The rift was 29 kilometers (18 miles) long, 80 meters (260 feet) wide on average, and 50 to 60 meters (170 to 200 feet) deep.

When that crack reaches the other side of the ice shelf, it will send a huge new iceberg drifting into Pine Island Bay. Researchers taking part in NASA’s Operation IceBridge have been closely monitoring the rift for a year with remote sensing equipment.

This image, acquired by the Enhanced Thematic Mapper (ETM) on Landsat 7, shows the rift on October 26, 2012. It still had a few more kilometers to go before reaching the other end of the ice shelf. The arrival of spring in Antarctica had cleared much of the floating sea ice away from Pine Island Glacier’s calving front. There was still some thin sea ice nearby (lower left), but for comparison, see this image when sea ice was more abundant near the front.

Scientists have no way of knowing exactly when the iceberg will break off, but they suspect that the absence of sea ice may hasten the birth. “Sea ice acts as a buttress or a damper to sea swell, protecting the front of these ice shelves or glaciers from calving,” explained NASA glaciologist Kelly Brunt. “So the fact that there’s no sea ice in front of Pine Island Glacier right now implies that it might be primed to calve.” 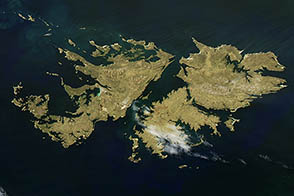