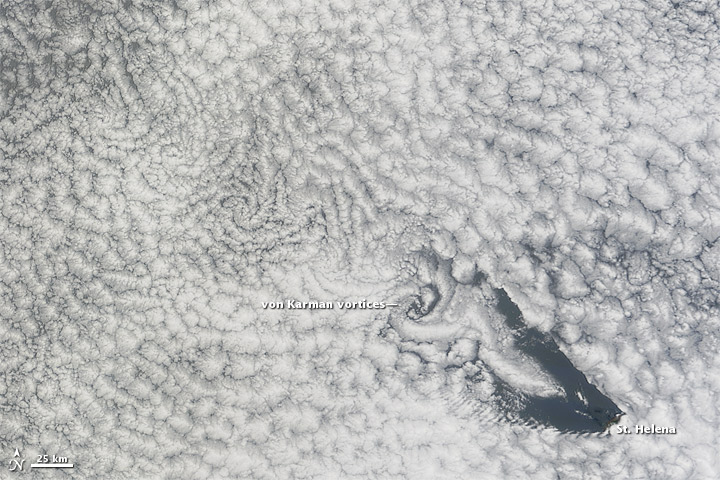 St. Helena is a small, rugged volcanic island in the southern Atlantic Ocean. At its highest point, Mount Actaeon, the island rises 818 meters (2,684 feet) above sea level—high enough to affect cloud formation. On November 15, 2012, the Moderate Resolution Imaging Spectroradiometer (MODIS) on NASA’s Terra satellite captured this natural-color image of cloud vortices stretching away from the island to the west-northwest.

When moving air masses encounter an obstacle such as a volcanic island, the wind flow is disrupted. Downstream from the obstacle, von Karman vortices form. These double-row vortices alternate their direction and rotation.

Clouds not only make the von Karman vortices visible to satellites sensors, they also make appealing pictures. Satellite sensors have spotted von Karman vortices around the globe, including sightings off of Guadalupe Island, near the coast of Chile, in the Greenland Sea, in the Arctic, even next to a tropical storm.

Located more than 1,800 kilometers (1,100 miles) west of Africa, St. Helena is as remote as it is rugged. The island was uninhabited when the Portuguese first discovered it in 1502, and became famous centuries later as the final home of Napoleon Bonaparte I of France. He was exiled there in 1815 and died on the island in 1821.