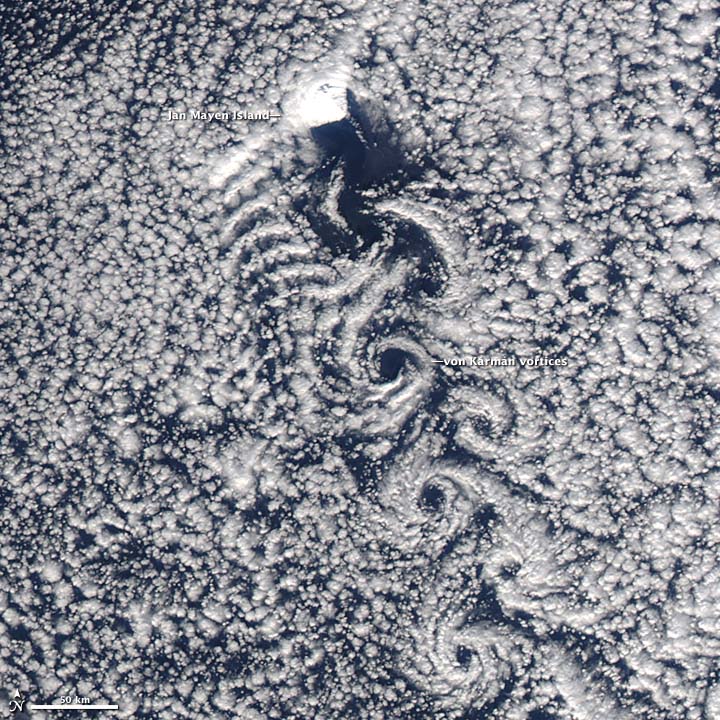 Theodore von Kármán, a Hungarian-American physicist, is well-known within NASA for helping found the Jet Propulsion Laboratory, but in atmospheric science circles he is most celebrated for his research on fluid turbulence and his pioneering work on a phenomenon known today as von Kármán vortices.

Von Kármán vortices, which can appear as long linear chains of spiral eddies, form nearly anywhere that fluid flow is disturbed by an object. The atmosphere behaves like a fluid, so the wing of an airplane, a bridge, and even an island can cause the vortices to form.

In the image above, an isolated Norwegian territory in the North Atlantic Ocean, called Jan Mayen Island, is responsible for the spiraling cloud pattern. The unique flow occurs when winds rushing from the north encounter Beerenberg Volcano, a snow-covered peak on the eastern end of the island that rises 2.2 kilometers (1.4 miles) above the sea surface. As winds pass around the volcano, the disturbance in the flow propagates downstream in the form of a double row of vortices that alternate their direction of rotation.