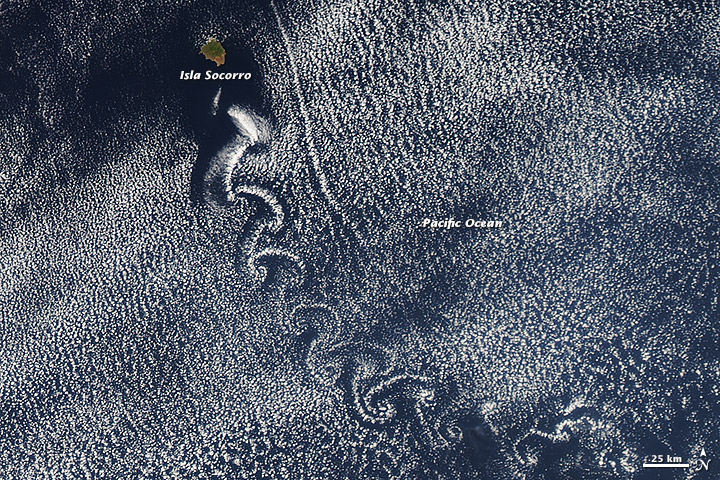 Theodore von Kármán, a Hungarian-American physicist, was the first to describe the physical processes that create long chains of spiral eddies like the one shown above. Known as von Kármán vortices, the patterns can form nearly anywhere that fluid flow is disturbed by an object. Since the atmosphere behaves like a fluid, the wing of an airplane, a bridge, or even an island can trigger the distinctive phenomenon.

On May 22, 2013, the Moderate Resolution Imaging Spectroradiometer (MODIS) on NASA’s Aqua satellite captured this natural-color image of cloud vortices behind Isla Socorro, a volcanic island in the Pacific Ocean. The island, which is located a few hundred kilometers off the west coast of Mexico and the southern tip of Baja California, is part of the Revillagigedo Archipelago.

Satellite sensors have spotted von Kármán vortices around the globe, including off of Guadalupe Island, near the coast of Chile, in the Greenland Sea, in the Arctic, and even next to a tropical storm.