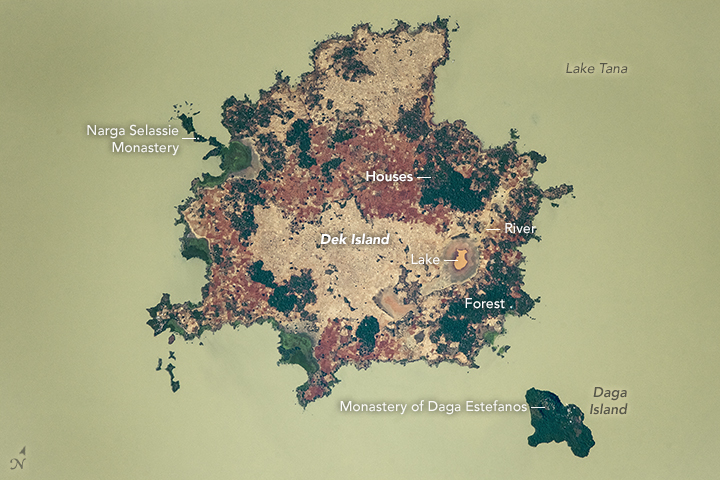 An astronaut aboard the International Space Station took this photograph of Dek and Daga Islands in Lake Tana, Ethiopia. Both islands are volcanic in origin, as is the lake itself.

Situated in the Amhara Region of the Ethiopian Highlands, Lake Tana is the largest lake in Ethiopia and acts as the headwaters of the Blue Nile River. Dek Island—at 7 kilometers or 4.4 miles from north to south—is the largest island in Lake Tana. The murky green color of the water results from algal blooms, which live on nutrients supplied from fertilizer fields, wastewater, and other sources of runoff that create nutrient pollution.

The dark green areas in the photo are patches of forest, while the lighter-toned and darker, salmon-colored patches are agricultural fields, which cover 70 percent of Dek Island. It is a prime area for farming because of high-quality volcanic soils, as well as heavy rains due to its location in the Intertropical Convergence Zone (ITCZ). Some of the more common crops are corn and millet, which are mostly consumed by the islanders. Coffee and mangos are the economic mainstays and are shipped to markets on the mainland.

Both islands are home to monasteries of the Coptic Church, most famously Narga Selassie on Dek Island and Daga Estefanos on Daga Island. For hundreds of years, the islands have helped protect the monasteries during times of war. Daga Estefanos is the resting place of mummified emperors who ruled Ethiopia (once known as Abyssinia) centuries ago.

This long-lens image illustrates the level of detail possible from a handheld digital camera shooting from the space station: the numerous white specks are the reflective tin roofs of houses and buildings.

Astronaut photograph ISS050-E-30102 was acquired on January 2, 2017, with a Nikon D4 digital camera using an 1150 millimeter lens, and is provided by the ISS Crew Earth Observations Facility and the Earth Science and Remote Sensing Unit, Johnson Space Center. The image was taken by a member of the Expedition 50 crew. The image has been cropped and enhanced to improve contrast, and lens artifacts have been removed. The International Space Station Program supports the laboratory as part of the ISS National Lab to help astronauts take pictures of Earth that will be of the greatest value to scientists and the public, and to make those images freely available on the Internet. Additional images taken by astronauts and cosmonauts can be viewed at the NASA/JSC Gateway to Astronaut Photography of Earth. Caption by Andi Hollier, Hx5, and M. Justin Wilkinson, Texas State University, Jacobs Contract at NASA-JSC.

Ancient monasteries and settlements dot these islands in the middle of Ethiopia’s largest lake.