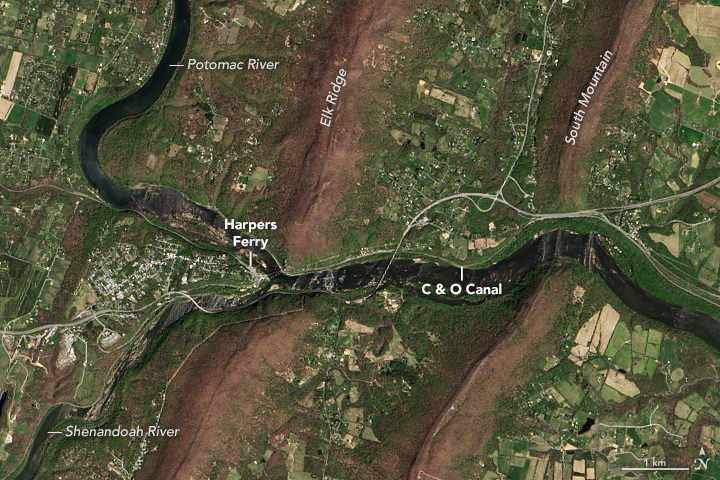 On a fall day in 1783, Thomas Jefferson stood on a slab of shale on a bluff in the small town of Harpers Ferry and looked east. Below him, the Shenandoah and Potomac Rivers converged and flowed through a gap in the sharp ridge that overlooks the town. The view “was worth a voyage across the Atlantic,” he later wrote in Notes on the State of Virginia.

“The passage of the Patowmac through the Blue Ridge is perhaps one of the most stupendous scenes in Nature,” Jefferson wrote in his chapter about Virginia’s mountains. “You stand on a very high point of land. On your right comes up the Shenandoah, having ranged along the foot of the mountain a hundred miles to seek a vent. On your left approaches the Patowmac in quest of a passage also. In the moment of their junction they rush together against the mountain, rend it asunder and pass off to the sea.” 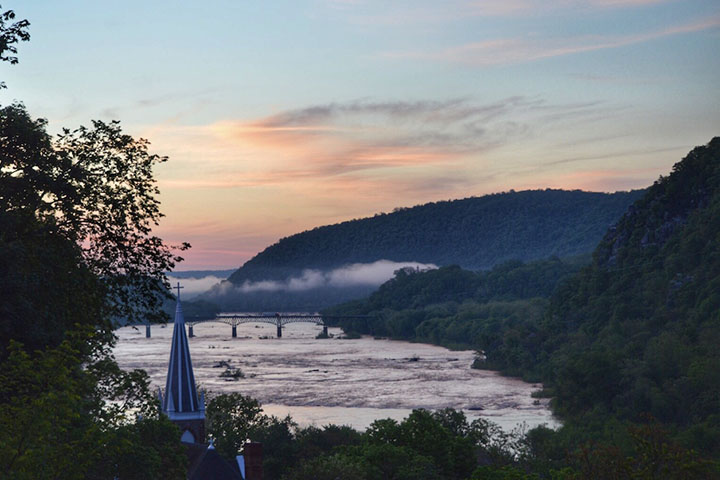 The slab of rock where he stood, known today as Jefferson’s Rock, remains one of the best places in Harpers Ferry to see the Potomac Water Gap.

Satellites offer an even loftier view. On April 20, 2016, the Operational Land Imager (OLI) on Landsat 8 captured this view of the water gap from an altitude of about 700 kilometers (430 miles). While spring warming has cast the valleys in green, the cooler tops of the ridges remained brown.

The first photograph, courtesy of the National Park Service (NPS), is a sunrise view of the Potomac Water Gap as seen from Jefferson’s Rock. The second photo, also courtesy of NPS, is an aerial of the town looking west. The Potomac River is on the right; the Shenandoah is on the left.

Harpers Ferry, West Virginia, population 293, lies at the tip of the peninsula formed by the confluence of the two rivers—a location that makes the lower part of the town quite prone to flooding.

The rivers are not alone in passing through the narrow gap in the ridge. A road, railway line, the Appalachian Trail, and the Chesapeake & Ohio Canal all crowd through the water gap as well. Today, the Potomac Water Gap stands at the heart of Harpers Ferry National Historic Park, a park that honors the role the town played in the U.S. Civil War. 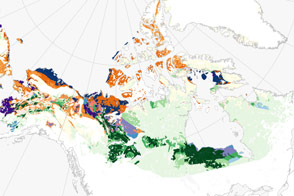