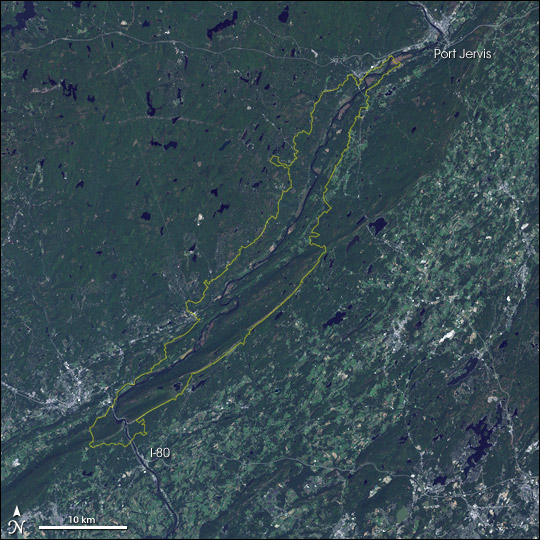 Delaware Water Gap National Recreation Area lies on the border of New Jersey and Pennsylvania. The park runs roughly 40 miles along the Delaware River and the Appalachian Mountains, which are immediately adjacent to the river. At its southern end, the river cuts through the Appalachian Range to continue south and east to Philadelphia. This natural water gap cut by the river now also serves as a passage through the mountains for Interstate 80, which runs from New York City just 90 miles away, across the U.S. to San Francisco.

This image shows the Delaware River running diagonally from northeast (top right) to southwest across the image, taking a sharp turn to form the actual water gap at the park’s southern end. The town of Port Jervis lies just above the northern end of the park. The southern end of the park is just beyond the gap through the Appalachians, where Interstate 80 runs immediately beside the river.

The park was created in 1965, under the original name of Tocks Island National Recreation Area, to support recreational use of area. The Army Corp of Engineers was to place a dam across the river to create a 37-mile-long lake holding nearly 250 billion gallons of water. However, the dam and many of the additional water-management contruction projects were ultimately abandoned in the face of public opposition and cost overruns. Congress de-authorized the project in 1992, though the National Recreation Area around the original reservoir site has been retained.

The park provides natural shelter for a wide variety of plant and animal life in the shade of its forested hills, and in the waters of its glacial lakes. This includes many beautiful song birds, eagles, and turkey vultures. The heavily cracked rocks provide shelter and wintering quarters for a variety of snakes. Other wildlife well-known in the area includes black bears and less welcome guests, such as the hemlock wooly adelgid (a pest which is destroying the park's hemlock tree stands) and gypsy moths (a foreign pest with no native biological controls that denudes forests of their leaf cover).

The park also includes a number of cultural resources such as archaeological remains of Native American settlements in the area from prehistorical and colonial times, fortifications in the area from the French and Indian War (1753-1760), as well as evidence of the area’s use as farming and mining land in the 19th century. The Appalachian Trail threads through the length of the park, and the park’s proximity to such major cities of New York and Philadelphia makes it a popular getaway nature experience.

This natural-colour image was collected by the Landsat 7 satellite's Enhanced Thematic Mapper Plus (ETM+) instrument on September 23, 1999.