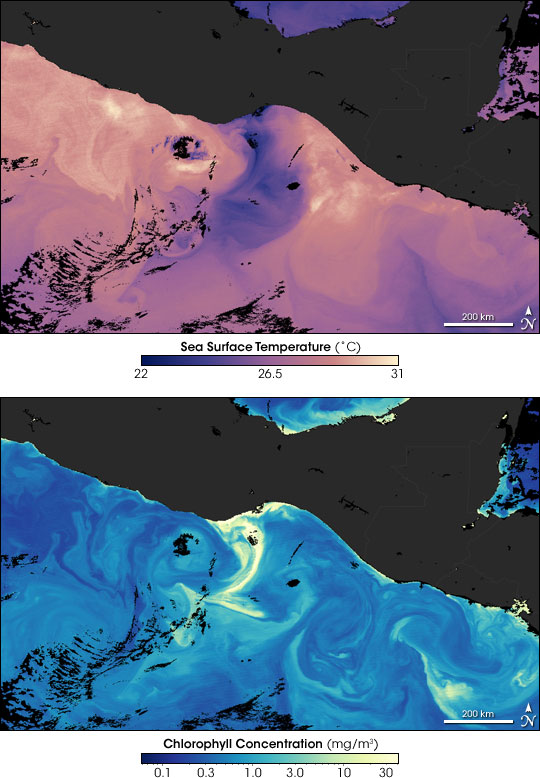 These water-color-like images of the Pacific Ocean (bottom), the Isthmus of Tehuantepec in Mexico (center), and the Gulf of Mexico (top) show sea surface temperatures (top image) and chlorophyll concentrations (bottom image) observed on January 4, 2005, by the Moderate Resolution Imaging Spectroradiometer (MODIS) on NASA’s Aqua satellite.

In both images, the most obvious feature is the swirl of color in the Pacific near the center of the images. In the sea surface temperature image, the swirl is purplish, and it indicates an area of cooler water. In the chlorophyll image, the plume is yellow, and indicates an area of higher chlorophyll concentrations. The co-location of the plumes isn't a coincidence. In the winter, strong winds blow from the Gulf of Mexico, across the isthmus, and out over the Gulf of Tehuantepec. The winds are so strong that they drive the surface waters of the ocean away from the shore. Cold water from deeper in the ocean wells up to replace it.

The waters from deeper down in the ocean are not only cooler, they also contain so many nutrients that they act like fertilizer. Microscopic plants living in the surface waters of the ocean bloom in response to this “fertilizer,” and the chlorophyll the plants contain changes the color of the ocean surface. Notice how closely the pattern of colder water in the top image matches the pattern of plant chlorophyll concentration in the lower image. In the Gulf of Mexico, the apparent high levels of chlorophyll do not seem as strongly related to temperature. It may be that here, blooms are being spurred by nutrient runoff from rivers and streams; it's also possible that the computer programs that analyze the satellite data to make the images are mistaking sediment in the coastal waters for chlorophyll.