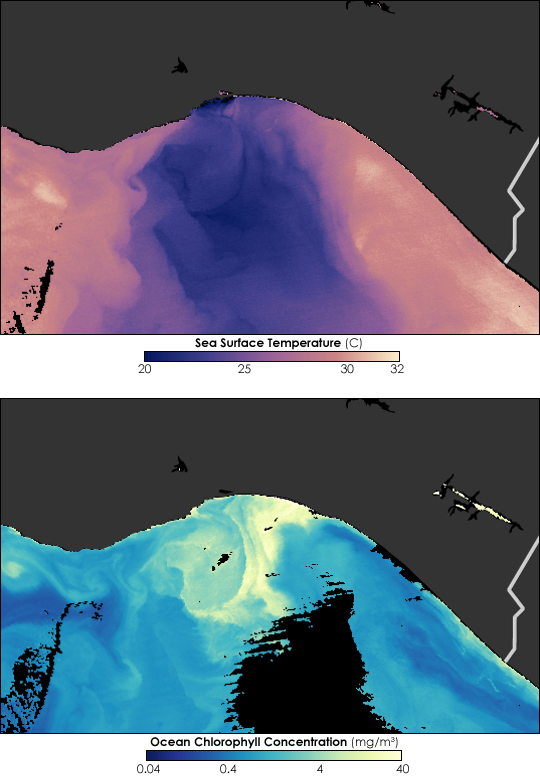 During the winter, Central America may not see much snow, but it does see wind. In southern Mexico, the winds roar out toward the Pacific Ocean through breaks in the western coastal mountains. Called the Tehuano winds, these powerful winds were raging on February 9, 2006. The Moderate Resolution Imaging Spectroradiometer (MODIS) on NASA’s Aqua satellite recorded the impact of the winds on the Gulf of Tehuantepec off the southern coast of Mexico, near the Guatemalan border on February 10, 2006.

The top image shows sea surface temperature, with deep purple indicating the coolest temperatures and pinkish yellow indicating the warmest. A swath of intense dark purple—indicating cold water—stretches southward away from the coast. This strip of cold water shows where the Tehuano winds pushed surface waters away from shore, and allowed cold, deep water to well up and replace it. The churning waters brought nutrients up from the bottom of the ocean, and the suffusion of nutrients fertilized plants growing in the surface waters of the ocean, allowing them to grow more quickly.

The bottom image shows chlorophyll concentration measured in milligrams per cubic meter of water, with blue indicating the lowest concentration and yellow indicating the highest. Plants, and thus chlorophyll, are thickest in the band of cold water stirred by the Tehuano winds. In both images, some areas appear black where clouds or sunglint (the reflection of sunlight off the ocean’s surface) interfered with the satellite’s ability to collect data. Land appears gray in both images.

The powerful Tehuano winds that created the ocean conditions seen here are generated by the interaction between high- and low-pressure weather systems over the Pacific and the Gulf of Mexico. As cold, high-pressure weather systems move southward over the Gulf of Mexico, they produce a pressure gradient between high pressure over the Gulf of Mexico and low pressure over the Pacific. If you walk into an air-conditioned grocery store on a hot summer day, you may feel cool air blowing into your face. This is because air conditioners are not only pumping out cool air, they are often pushing more air into each cubic meter of the store than exists outside. Pressure gradients work in a similar way through southern Mexico and Central America, causing strong winds. Passing through narrow breaks in mountain chains, the winds intensify. Once they reach the Pacific, they affect the ocean water, as these images show.

La Niña, the large area of cold water in the Pacific Ocean widely blamed for last summer's drought and often related to an increase in the number of hurricanes that make landfall, appears to be on its last legs.