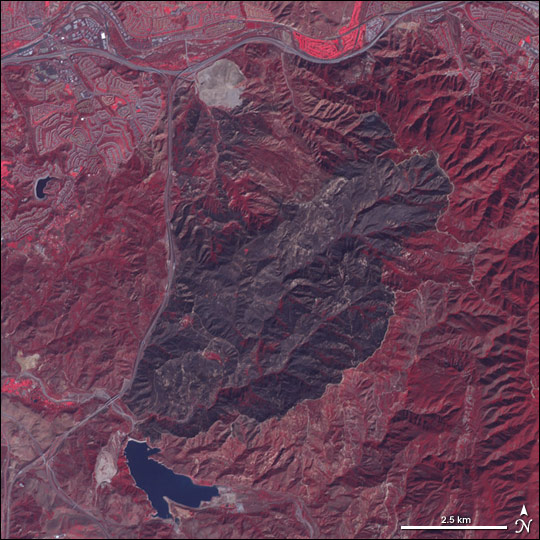 A charcoal-colored burn scar sprawls across the hills and valleys of the Cleveland National Forest southeast of Los Angeles in this infrared-enhanced satellite image. Captured on February 12, 2006, by the Advanced Spaceborne Thermal Emission and Reflection Radiometer (ASTER) on NASA’s Terra satellite, the scene shows the area north of Santiago Reservoir (blue lake near bottom of scene) and south of the 91 Freeway (the wavy gray line across the top) where the Sierra Fire scorched 10,854 acres (about 44 square kilometers), according to the USDA Forest Service’s Incident Information System Website.

In the image, unburned vegetation appears red, the burned area is charcoal, water is blue, and constructed surfaces, such as cities and roads, appear light gray, sometimes tinged with lavender. (The large image shows more of the surrounding urban areas.) The very bright red areas are probably irrigated vegetation.

The wildfire started on February 6, apparently escaping from a planned fire (known in forest management jargon as a prescribed burn) because of fierce, unpredicted Santa Ana winds. Thousands of people were forced to evacuate their homes for a short time while firefighters brought the blaze under control. Within the burned area, small pockets of red indicate areas that managed to escape the worst of the blaze. These lightly burned or unburned areas can act as small refuges for forest life and can help renew the area after a burn.

The Sierra Fire left a charcoal-colored burn scar across the hills and valleys of the Cleveland National Forest southeast of Los Angeles, California, on February 12, 2006.

Lightning triggered a complex of forest fires in Northern California’s Klamath National Forest on June 21, 2008. The image centers on the largest of the fires in the Siskiyou Complex.