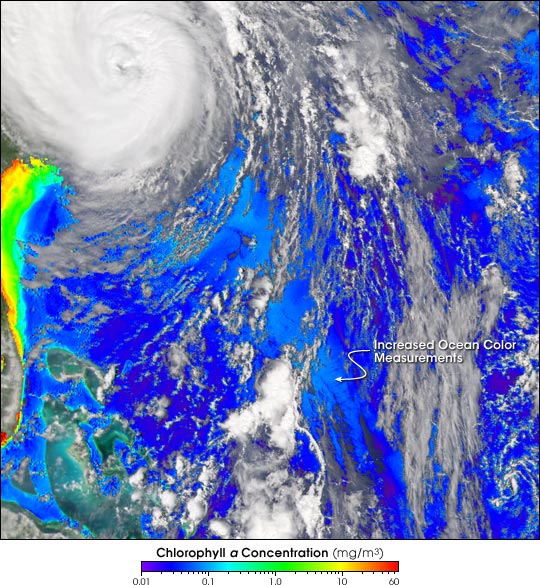 After Hurricane Isabel tracked across the western Atlantic in September of 2003, satellites measured an apparent increase in chlorophyll concentration in the surface waters of the ocean. (Chlorophyll concentration is related to the abundance of phytoplankton—microscopic plants that live in surface waters.) Measurements of chlorophyll are known as “ocean color” measurements because they are based on the absorption of green and blue light by substances in the sea water.

The high winds of hurricanes are known to vigorously stir the ocean surface as they pass, mixing cold, subsurface water with the warm, top layer. Cold ocean water is generally rich in nutrients such as nitrogen and iron, which act as fertilizer and which could have spurred a phytoplankton growth spurt. An increase in oceanic life is one explanation for the apparent increase in chlorophyll concentration measured by the Sea-viewing Wide Field-of-view Sensor (SeaWiFS) on September 18, 2003.