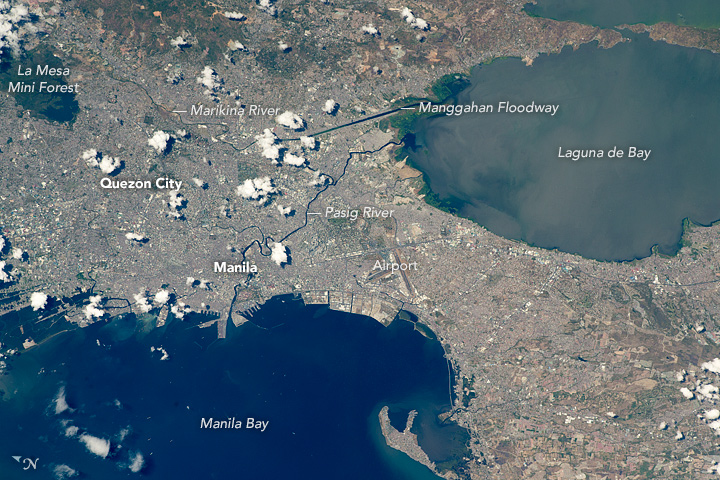 While orbiting over the South China Sea, an astronaut aboard the International Space Station (ISS) took this oblique photograph of the blocky red and gray urban pattern of Manila and surrounding cities. Manila is sandwiched between the salt water of Manila Bay—with its scatter of anchored ships—and Laguna de Bay. The great docks at the port can be seen jutting into Manila Bay (image center left), while the heart of the city lies immediately inland of the port. A forested nature reserve with a lake is located within one of the mountainous areas surrounding the metro zone (top left).

The combined population of Manila and neighboring Quezon City is 4.7 million people. Manila itself has one of the highest population densities in the world, with 42,857 people per square kilometer. The metropolitan area is the political and economic hub of the Philippines, and its international trade connections are so widespread the Globalization and World Cities Research Network classed Manila as a global city. Manila’s history has always been connected to trade. Arriving from Mexico, the conquistadors founded Manila in 1571, and soon the city became the Far East anchor of the Acapulco-Manila Galleon trade route connecting Spanish America with Asia. This represents one of the earliest examples of globalization.

The dark lines of several waterways are prominent amidst the gray cityscape. The Pasig River winds through the middle of the city. The straight line of the Manggahan Floodway is a flood-control channel engineered to divert water from the Marikina River away from the city center and into Laguna de Bay. Engineering works along the floodway also control tidal saltwater flow into Laguna de Bay.

Astronaut photograph ISS047-E-99713 was acquired on May 6, 2016, with a Nikon D4 digital camera using a 400 millimeter lens, and is provided by the ISS Crew Earth Observations Facility and the Earth Science and Remote Sensing Unit, Johnson Space Center. The image was taken by a member of the Expedition 47 crew. The image has been cropped and enhanced to improve contrast, and lens artifacts have been removed. The International Space Station Program supports the laboratory as part of the ISS National Lab to help astronauts take pictures of Earth that will be of the greatest value to scientists and the public, and to make those images freely available on the Internet. Additional images taken by astronauts and cosmonauts can be viewed at the NASA/JSC Gateway to Astronaut Photography of Earth. Caption by M. Justin Wilkinson, Texas State University, Jacobs Contract at NASA-JSC.

The political and economic hub of the Philippines has a long history of globalization. 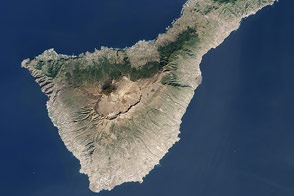