A Gap in the Andes 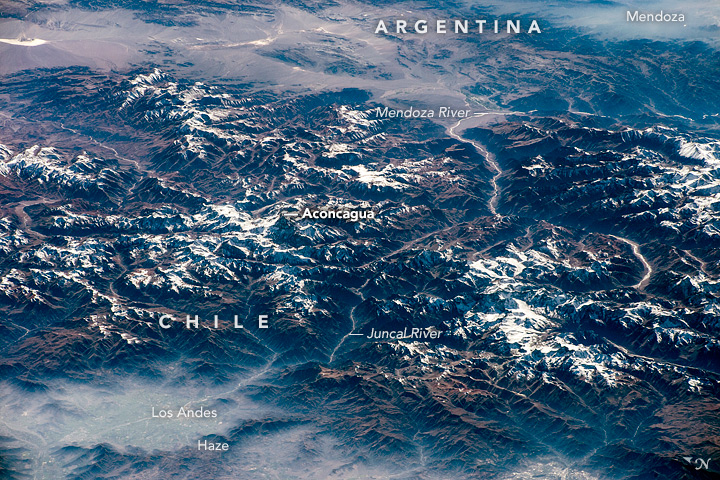 From 400 kilometers (250 miles) above the Pacific Ocean, an astronaut aboard the International Space Station captured this oblique photograph of the Andes Mountains. The mountain range forms the border between Chile and Argentina’s wine country.

This view is notable because it reveals the canyons and valleys followed by the Pan-American Highway. The spacecraft and Sun were in just the right positions for the Sun’s reflection to illuminate the thin rivers that run through the same deep valley as the highway. This pass through the Andes is the main route between Chile’s capital, Santiago (lower right) and Mendoza, the heart of Argentina’s wine-making industry.

The highway route over the Andes starts just north of Santiago at the small town of Los Andes and snakes its way up the forested Juncal River valley, where it passes close to Aconcagua, the highest mountain in the Western Hemisphere. Near that mountain, the highway crosses the international border into the Mendoza River valley and passes through a high, treeless desert valley. Then it bends southeast and descends to the Mendoza basin, marked here by a blanket of haze. A variable mix of smoke, dust, and fog is a typical winter phenomenon on windless days in the region; you can also see it in the basins around Santiago and Los Andes.

The Pan-American Highway stretches 30,000 kilometers (19,000 miles) and joins seventeen countries in the Americas, from southernmost South America to the Arctic Ocean.

Astronaut photograph ISS043-E-83229 was acquired on April 2, 2015 with a Nikon D4 digital camera using a 290 millimeter lens, and is provided by the ISS Crew Earth Observations Facility and the Earth Science and Remote Sensing Unit, Johnson Space Center. The image was taken by the Expedition 43 crew. The image in this article has been enhanced to improve contrast. The International Space Station Program supports the laboratory as part of the ISS National Lab to help astronauts take pictures of Earth that will be of the greatest value to scientists and the public, and to make those images freely available on the Internet. Additional images taken by astronauts and cosmonauts can be viewed at the NASA/JSC Gateway to Astronaut Photography of Earth. Caption by M. Justin Wilkinson, Texas State U., Jacobs Contract at NASA-JSC.

An astronaut on the International Space Station captured this view of the river valley that contains the famed Pan-American Highway. 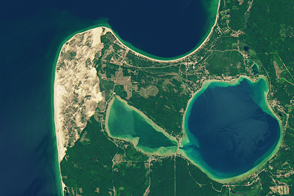