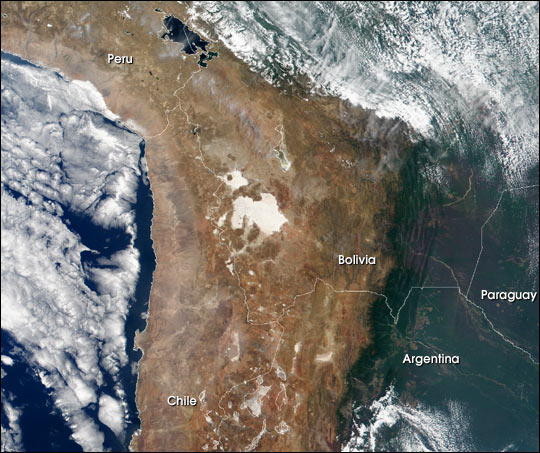 Once home to the powerful Inca Empire, the spectacular vistas and canyons of the South American Andes are now a favorite to mountain bikers, climbers and other tourists looking for an adventure. This true color image of the Central Andes and surrounding landscape was acquired by the Moderate-resolution Imaging Spectroradiometer (MODIS), flying aboard NASA’s Terra spacecraft. The dark green area to the right of the brown mountains are the Gran Chaco planes, which consist mostly of alluvial fans and wetlands. To the west is the Pacific Ocean.

In the upper half of this image, the Andes are formed by two distinct mountain ranges that appear as darker reddish-brown bands running northwest to southeast. Between the two ranges, shown in a lighter brown, sits the Altiplano plateau, which spans southern Peru and northern Bolivia. The plateau sits at 3660 meters (12,000 feet) and is covered in mazelike canyons, marshlands and lakes. The largest of the lakes—Lake Titticaca—can be seen as the dark blue patch in southern Peru. The two mountain ranges supporting the plateau eventually come together along the border of Argentina and Chile to form one continuous range.

The Andes have been forming over the past 170 million years as the Nazca Plate lying under the Pacific Ocean has forced its way under the South American Plate and pushed up its western edge. The subduction of one plate under the other has given rise to a number of volcanoes that dot the western edge of the mountain range. Earthquakes are also very common in this region.

Image by NASA GSFC, based on data from the MODIS science team.