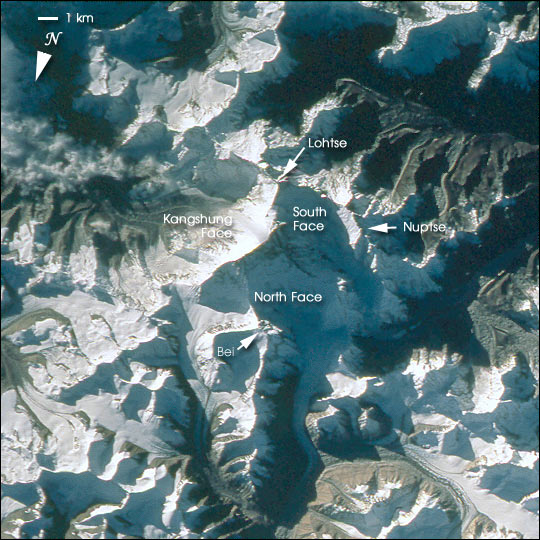 Mt. Everest is the highest (29,035 feet, 8850 meters) mountain in the world. This detailed look at Mt. Everest and Lhotse is part of a more extensive photograph of the central Himalaya taken in October 1993 that is one of the best views of the mountain captured by astronauts to date. It shows the North and South Faces of Everest in shadow with the Kangshung Face in morning light. Other major peaks in the immediate area are Nuptse and Bei Peak (Changtse). The picture was taken looking slightly obliquely when the spacecraft was north of Everest. Everest holds a powerful fascination for climbers and trekkers from around the world. The paths for typical North and South climbing routes are sketched on this image.

Much of the regional context can be seen in the complete photograph, which shows Mt. Everest and other large peaks to the northwest. More information on the photograph STS058-101-12 can be found at the Gateway to Astronaut Photography of Earth. An unannotated version can also be downloaded. The digital images shown have been reduced to a spatial resolution equivalent to 48 m / pixel; a high-resolution digital image of the same photograph would be at 12 meters per pixel.

A new interactive tutorial, Find Mt. Everest From Space, is now available on the Web. The presentation was created by the Earth Sciences and Image Analysis Laboratory, Johnson Space Center, from astronaut training materials developed by William R. Muehlberger (University of Texas, Austin), who has instructed astronauts in geology since the Apollo missions. While circling the globe every ~90 minutes, astronauts have only seconds to find key peaks in the Himalayas. These photographs are used to train their eyes so they can rapidly find and photograph Everest when they pass over. The tutorial features astronaut photographs of the Himalayas, interactive graphics that illustrate key geographic features for locating Mt. Everest, and. information on the geology of the region. The lesson concludes with a test of your ability to identify Everest in different photographs taken from the Space Shuttle.

Mt. Everest is the highest (29,035 feet, 8850 meters) mountain in the world. This detailed look at Mt. Everest and Lhotse is part of a more extensive photograph of the central Himalaya taken in October 1993 that is one of the best views of the mountain captured by astronauts to date.