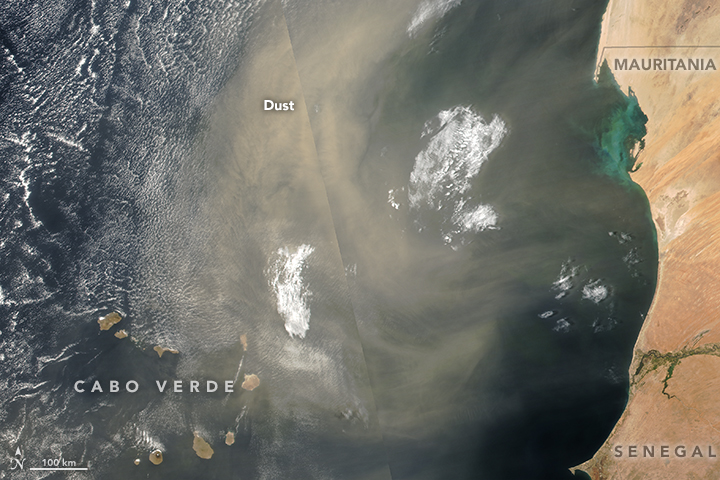 In mid-June 2016, winds lofted thick plumes of dust from northern Africa’s deserts high into the air. When dust gets caught in upper level winds, it can travel long distances and have far-reaching impacts. For instance, dust from Africa helps build beaches in the Caribbean and fertilizes soils in the Amazon. It affects air quality in Europe and North and South America. And dust may play a role in the suppression of hurricanes and the decline of coral reefs.

The map above shows the concentration of aerosols on June 19, 2016, produced with data from the Ozone Mapping Profiler Suite (OMPS) on the Suomi-NPP satellite. High concentrations are represented with shades of deep red; the lowest concentrations are shades of light yellow. The largest, thickest plume appears to stem from the Sahara in western Africa.

When this map was produced, winds had already swept a plume of dust westward over the Atlantic Ocean and the archipelago of Cabo Verde (Cape Verde). A natural-color view of this plume is pictured in the second image, acquired on June 19 with the Visible Infrared Imaging Radiometer Suite (VIIRS) on Suomi-NPP. A model run by the Barcelona Dust Forecast Center anticipated that the dust would reach the Canary Islands, north of this scene, by June 22.

The top map shows a thinner but measureable plume of Saharan dust also spread north toward Europe. To see how it got there, check out this series of images showing the plume’s progression since June 16.

The outbreak of dust from the western Sahara was coincident with a plume of dust from Africa’s northeast, carried eastward over the Red Sea. The beginning stages of that storm, triggered by a cold front and turbulent mixing of air, are shown in this image from June 15. 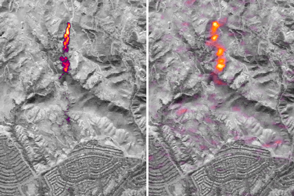