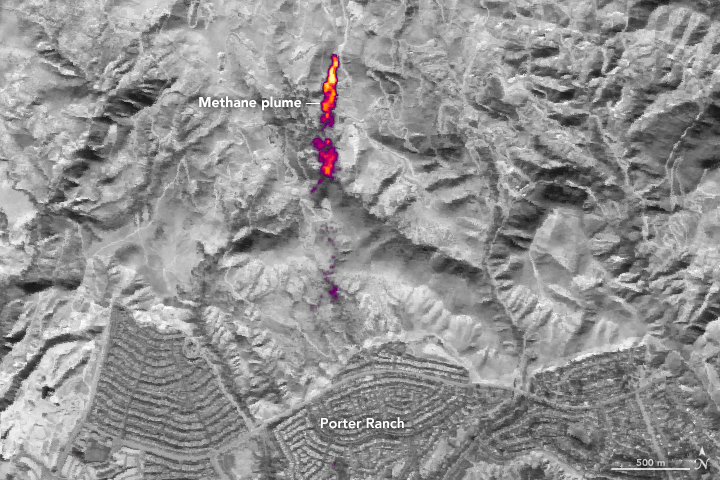 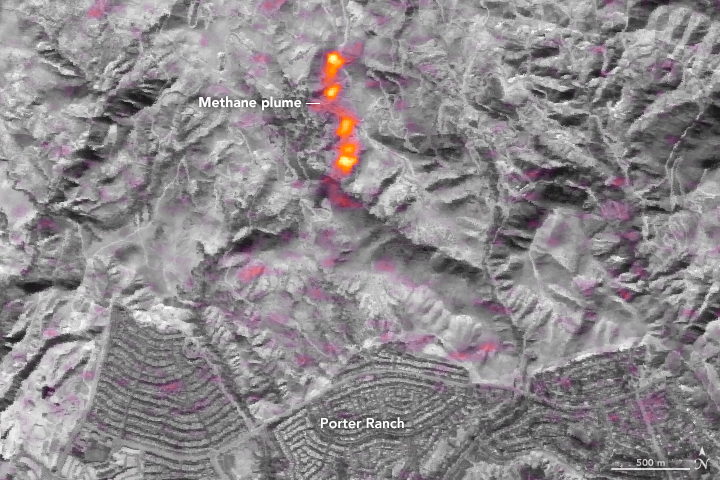 For the first time, an instrument onboard an orbiting spacecraft has detected the methane emissions leaking from a single facility on Earth’s surface. The observation by the Hyperion spectrometer on NASA’s Earth Observing-1 (EO-1) is an important breakthrough as scientists work to measure and monitor emissions of this potent greenhouse gas from space.

As described in a new paper accepted by the journal Geophysical Research Letters, the research team detected methane leaking near Aliso Canyon, California. In October 2015, employees of SoCalGas detected methane leaking from a large underground storage facility near Porter Ranch, California. As part of an investigation of the accidental methane release, EO-1’s Hyperion instrument successfully detected the gas on three separate overpasses during the winter of 2015–16.

The images above show the observations of methane in Aliso Canyon as observed by Hyperion (second image) and by the Airborne Visible/Infrared Imaging Spectrometer (AVIRIS), which was flown on a NASA ER-2 aircraft. The data were acquired 11 days apart in January 2016. (Note: The additional purple splotches in the Hyperion image are the result of instrument noise; they are not signals of other methane leaks or sources. Hyperion was not specifically designed for methane sensing, and it is not as sensitive and discriminating as AVIRIS.)

“This is the first time the methane emissions from a single facility have been observed from space,” said David R. Thompson, an atmospheric chemist at NASA’s Jet Propulsion Laboratory and an author of the study. “The percentage of atmospheric methane produced through human activities remains poorly understood. Future satellite instruments with much greater sensitivity can help resolve this question by surveying the biggest sources around the world and helping us to better understand and address this unknown factor in greenhouse gas emissions.”

EO-1 is a land-imaging mission designed to demonstrate new instruments and spacecraft systems. Launched in 2000, EO-1 has validated technologies for the Operational Land Imager used on the Landsat-8 satellite mission and future imaging spectrometer missions, while also supporting disaster-response applications. Other institutions participating in the study include Caltech, GFZ German Research Centre for Geosciences, and NASA’s Goddard Space Flight Center.