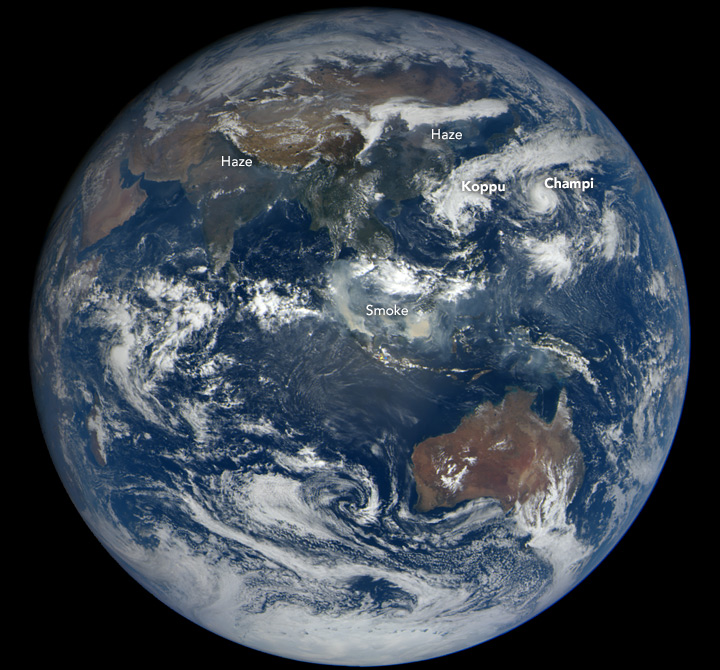 When the DSCOVR mission was conceived in the late 1990s, one of the central ideas was to provide daily, natural-color views of the entire Earth set against the backdrop of space—a view afforded at that point to just a few astronauts and a handful of space probes. Those images would be freely available to the public—not just the scientists and the space industry—on the Internet. Seventeen years later, everyone can now look at our home every day.

On October 19, 2015, NASA launched a new website where it will post images of the full, sunlit side of Earth as observed by EPIC, the Earth Polychromatic Imaging Camera. The instrument flies on the Deep Space Climate Observatory (DSCOVR), a satellite built through a partnership between NASA, the National Oceanic and Atmospheric Administration (NOAA), and the U.S. Air Force. DSCOVR collects its images and measurements from a vantage point one million miles above the Earth and toward the Sun.

Once a day, the EPIC team at NASA will post roughly a dozen new color images of Earth that were acquired 12 to 36 hours earlier. The image above was captured by EPIC at 04:17:11 Universal Time (Greenwich Mean Time) on October 21, 2015. The video below shows a sequence of images acquired on October 17.

The primary objective of the DSCOVR mission is to maintain NOAA’s real-time solar wind monitoring capabilities, which are critical to the accuracy and lead time of space weather alerts and forecasts. NASA has two Earth-observing instruments on the spacecraft, including EPIC, a four-megapixel CCD camera and telescope.

EPIC assembles its photograph-like views by combining information from the instrument’s red, green, and blue bands. Bands are narrow regions of the electromagnetic spectrum to which a remote sensing instrument responds. When EPIC collects data, it takes a series of 10 images at different bands—from ultraviolet to near infrared.

The effective resolution of the EPIC camera is somewhere between 10 and 15 kilometers (6 to 9 miles) per pixel, according to Adam Szabo, DSCOVR project scientist at NASA’s Goddard Space Flight Center. Since Earth is extremely bright compared to the darkness of space, the exposure time for images is as little as 20 to 100 milliseconds. The much fainter stars in the background are not visible because of this short exposure time.

You can view those images daily by clicking here. All images are public domain.