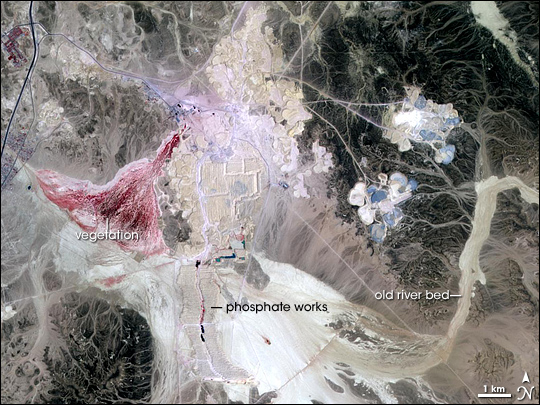 Plants, animals, and people all need phosphorus to function. In the human body, phosphorus plays a critical role in everything from shaping DNA to strengthening teeth. In agriculture, phosphorus acts as fertilizer to improve crop yield. Because phosphorus can’t be artificially produced, it must be mined from phosphorus-rich compounds, or phosphates. Phosphates are among Jordan’s most abundant natural resources, and phosphate mining is one of the country’s leading industries.

The Advanced Spaceborne Thermal Emission and Reflection Radiometer (ASTER) on NASA’s Terra satellite captured this image of a Jordanian phosphate mine on September 17, 2005. This image uses a combination of visible and infrared light to highlight differences between certain features. In this false-color image, vegetation appears red, deep water appears dark blue, shallow water and/or saturated salts appear pale blue, and rock and dirt range in color from off-white to black.

In the lower part of the image, just left of center, a network of rectangles indicates part of the mining operation. In the east are clusters of almost perfectly round shapes, some of them colored electric blue. These blue pools may hold shallow water and/or water-soaked salts. Phosphate mining often involves a floatation process in which phosphate particles float on the surface of water. A close look at the top middle part of the image shows a complex of round shapes that may have been used in earlier operations.

In the left part of the image, the spray of red indicates vegetation. Although the vegetation appears bright in this image, it is probably sparse. The large off-white shape near the bottom of the image indicates a dried-up riverbed, and it follows a meandering path from the hills in the east, where the riverbed is darker in color. As it changed course, the now-dry river once sported a mesh of braided streams that left their own dry beds near the bottom of the image. The current mining operation probably takes advantage of phosphate-rich rocks residing in this riverbed.

According to the Jordanian Natural Resources Authority, phosphate formations cover roughly 60 percent of the country’s total area, and reside mostly in a 300-kilometer- (185-mile-) wide swath that passes north to south through the country.