A Band of Fire in Sub-Saharan Africa 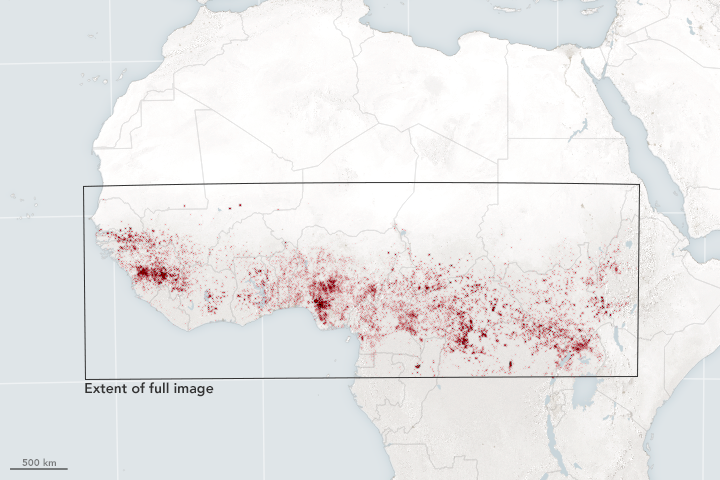 When seasonal rains diminish in November, a long band of fire begins to emerge in satellite imagery of Africa. It extends across the width of the continent, from Senegal to Eritrea. The number of fires slowly increases, usually peaking in January. In March, the band of fire fades and the rains return. (View our global maps section to see how fire patterns change over the course of a year in Africa.)

The vast majority of fires in this region are lit by people, though the reasons for starting them vary. Fire is often used to convert savanna, grassland, and forests into farmland. Once fields have been established, fire is used to clear fields of crop stubble and to return nutrients to the soil. In areas where grazing is widespread, it encourages the growth of fresh forage for animals. In some areas, fire is used as a tool by game hunters as they stalk prey.

On January 30, 2016, the Visible Imaging Radiometer Suite (VIIRS) on the Suomi NPP satellite acquired data on fires burning across northern sub-Saharan Africa. In the map at the top of the page, red dots indicate hot spots where the sensor detected unusually warm surface temperatures associated with fires. The natural-color mosaic (second image) shows the breadth of the diffuse cloud of smoke and dust.

The wide image depicts a range of ecosystems and different patterns of land use. The northernmost part of the image is desert; it lacks fires because it has only sparse vegetation and few people. Immediately to the south, darker brown grasslands predominate. Fires are scarce but not entirely absent. Then the landscape transitions into a mixture of savanna and cropland—environments that appear brown with speckles of green. With larger populations and more agricultural activity, these areas are dense with fire. The southernmost swath is full of dark green savannas and rainforests, where fire is common. 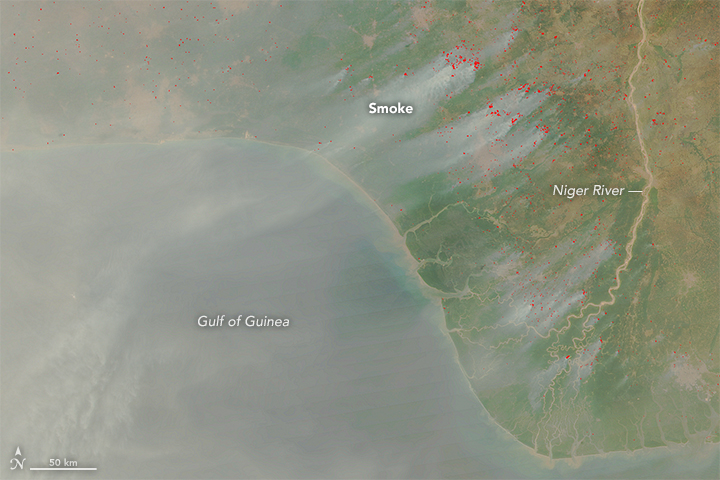 This close-up, detailed view shows large numbers of agricultural fires near the Niger River Delta. Notice how the plumes of smoke tend to be larger and more distinct in this forested area, probably because the fires are burning denser vegetation in fairly humid conditions. Dense, moist vegetation tends to produce light-colored smoke, while grassland fires in dry environments tend to produce dark smoke with more black carbon aerosols.

For much of the region, the fires are so small and widely spaced that the smoke has become diffuse. A thick plume of dust from the Bodélé Depression in Chad—a dried up lake bed has become one of the largest sources of dust in the world—also mixes with the smoke to make the image fuzzy and opaque in some places.

“This fascinating image helps underscore just how widespread the fires are in this part of the world,” said Charles Ichoku, a scientist at NASA’s Goddard Space Flight Center. The combination of smoke and dust can alter the atmosphere in significant ways. “Notice how you can hardly see the dark vegetated background in many areas because of how much black carbon these fires are putting into the atmosphere.”

Working with colleagues from several countries, Ichoku is leading an interdisciplinary research project to determine whether fires in northern Africa may be affecting regional precipitation patterns. Ichoku suspects that the sheer number of fires in this region may inhibit rainfall during certain parts of the year. It also may have exacerbated drought conditions that have led to dramatic retreats in the size and health of Lake Chad.

Ichoku added that changes caused by fire—darkening of the land surface, extra heat being released into the atmosphere, and the particles in smoke—are the key mechanisms that likely link fire activity and the water cycle.

Every year, a massive band of manmade fire emerges in satellite imagery of northern Sub-Saharan Africa in November.

Hundreds of fires, probably related to agriculture, were burning across West Africa on December 26, 2009, when Aqua MODIS captured this image.