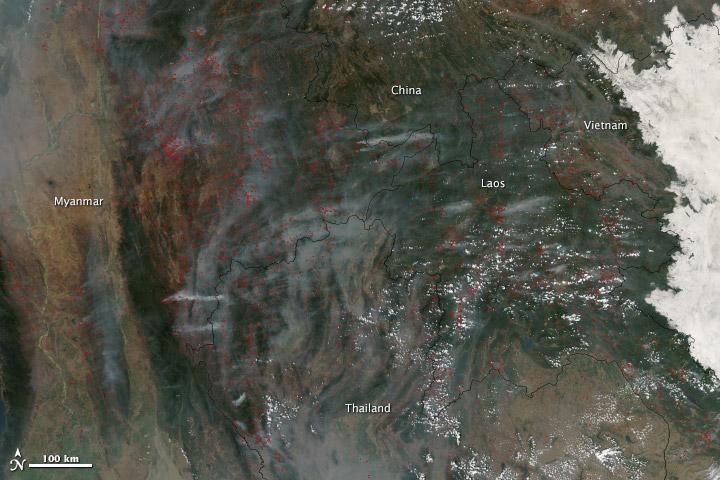 Fire and smoke dominate the landscape in this image of Southeast Asia taken by the Moderate Resolution Imaging Spectroradiometer (MODIS) on NASA’s Aqua satellite on March 18, 2014. Marked in red, the fires burn largely in the subtropical forests common in northern Indochina. Most fires in this region are deliberately set for a variety of reasons, including slash and burn agriculture. When a plot of land becomes exhausted, farmers shift cultivation to another plot where they cut the trees and brush at the beginning of the dry season in January and February. Once the dead plant material has dried, they set fire to it. Such fires peak in March and April.

From space, MODIS detects thermal anomalies, including fires, flares, and volcanoes. Each MODIS "fire pixel" or fire detection covers one square kilometer, which means that one or more fire is burning in the corresponding one-square kilometer area on the ground. In the wider large image, there are approximately 850 fire pixels, so there are at least 850 fires burning in this scene. MODIS tends to undercount fires because it can’t detect fires through smoke or clouds, nor does it see small cool fires—a fire type common to land use fires.

Satellite measurements of fire are valuable because they show the density of the fires and patterns in fire timing and frequency. Such patterns can help scientists assess the health of the burned forest. The forest in this region is a mosaic of deciduous and evergreen forest and can be prone to fire, particularly deciduous bamboo forest. While fire can stimulate new growth in the forest, if fires occur too frequently, the nature of the forest (and its ability to take in carbon) will change.

The image also shows where smoke is affecting air quality. The smoke contains soot and other particulates that pose a threat to human health and affect regional climate. Burning also releases greenhouse gases. Globally, fires release about 2 Petagrams of carbon into the atmosphere every year. Deforestation and other land use change accounted for about 8 percent of human carbon emissions between 2003 and 2012, though such emissions are decreasing.