Elba and the Mediterranean at Night 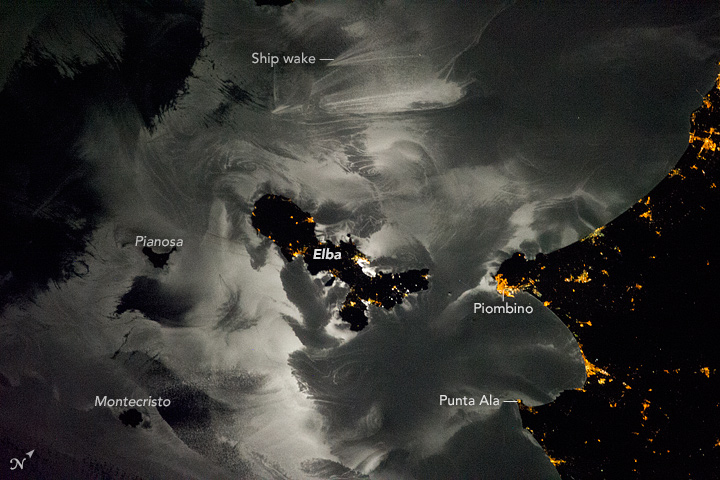 Part of the astronaut experience is seeing the planet transform from day to night in ways that earth-bound people rarely see. A crew member aboard the International Space Station took this photograph of the northern Mediterranean Sea and some coastal Italian towns and islands.

The reflection of the Moon on the sea surface—moonglint—reveals highly complex patterns. The strongest reflection is near the center of the Moon’s disc, which brightens the water around the island of Elba. In these complex patterns, the dark areas of the sea surface can sometimes make islands (such as Montecristo and Pianosa) harder to see. (A similar phenomenon happens in the daylight, as shown in sunglint images of lakes in Brazil and aquaculture in the Nile Delta.)

The reflection off sea surfaces captures many different natural processes, but also some made by humans. North of Elba, waves trailing behind ships make the classic V-shaped pattern. The meandering line coming off Montecristo Island is an “island wake,” a result of alternating vortices of wind that develop on the downwind side of the island. This wake is the strongest evidence that a northeast wind was blowing (right to left in this image) on the night of the photo. A shorter, meandering wind pattern is being shed off Punta Ala on the mainland. Smoother surfaces, protected from wind, are usually brighter because they are better mirror for moonlight.

The sea surface also displays numerous tight swirls known as gyres. The broad swath of parallel lines (image top left) are probably part of the larger circulation of the sea, which usually experiences north-flowing currents around Elba. An animation of the larger swirls of the Mediterranean can be seen here.

Astronaut photograph ISS037-E-15305 was acquired on October 17, 2013, with a Nikon D3S digital camera using a 180 millimeter lens, and is provided by the ISS Crew Earth Observations Facility and the Earth Science and Remote Sensing Unit, Johnson Space Center. The image was taken by a member of the Expedition 37 crew. The image has been cropped and enhanced to improve contrast, and lens artifacts have been removed. The International Space Station Program supports the laboratory as part of the ISS National Lab to help astronauts take pictures of Earth that will be of the greatest value to scientists and the public, and to make those images freely available on the Internet. Additional images taken by astronauts and cosmonauts can be viewed at the NASA/JSC Gateway to Astronaut Photography of Earth. Caption by M. Justin Wilkinson, Texas State U., Jacobs Contract at NASA-JSC. 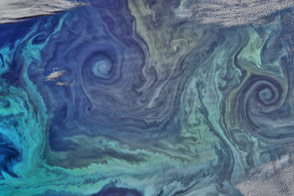