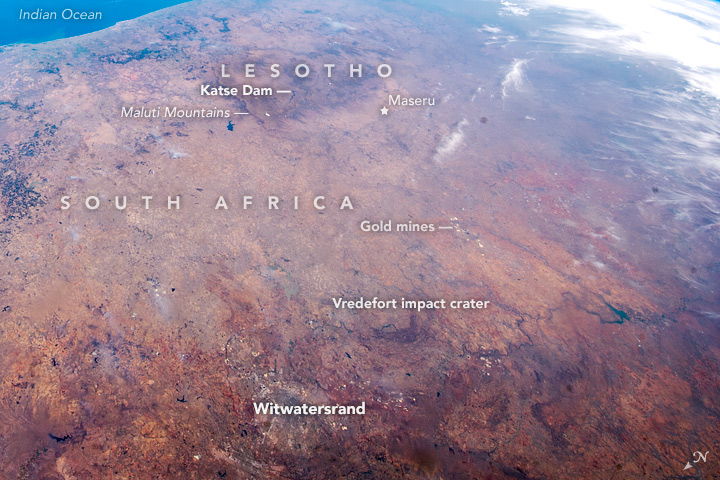 An astronaut aboard the International Space Station (ISS) looked toward the horizon as the spacecraft sped across southern Africa. The crew member used a short lens that mimics closely what the human eye sees—in this case, a big panorama from a point over northern South Africa, looking southeast to the Indian Ocean.

The image shows many details, but one of the most striking is the political boundary defining the small country of Lesotho, one of the few places on Earth where a political boundary can be seen from space. The greener, more vegetated South Africa agricultural landscape (with a very low population density) contrasts with the less vegetated, tan landscape of the Lesotho lowlands, where more dense populations live. Lesotho is a small enclave of 2 million people completely surrounded by the Republic of South Africa (population 53 million).

The Katse Dam reservoir in Lesotho was built as part of an international agreement to increase the water supply to the many, rapidly growing cities of the distant Witwatersrand (lower left). In Africa’s largest water transfer project, water from the high-rainfall zone in the mountains of Lesotho is fed from Katse through tunnels dug beneath the Maluti Mountains. The water then flows 250 kilometers (150 miles) in rivers to the Witwatersrand, South Africa’s industrial heartland.

ISS crews can visually pinpoint the Witwatersrand by the scatter of small, but prominent, light-toned mine dumps full of the waste material remaining after the extraction of gold. The mine dumps are the main feature that crews can readily see because even large cities can be difficult to detect from space as the ISS rapidly flies past. More than 12.3 million people live in this major urban region.

One other detail stands out. A series of concentric lines indicates one of the Earth’s oldest and largest visible impact craters. The Vredefort impact crater was caused by an asteroid 10 kilometers (6 miles) in diameter that impacted the region about 1.8 billion years ago. The original crater is estimated to have been 300 kilometers (200 miles) in diameter. Today it is eroded and partly obscured by younger rocks.

Astronaut photograph ISS045-E-2492 was acquired on September 14, 2015, with a Nikon D4 digital camera using a 14 millimeter lens, and is provided by the ISS Crew Earth Observations Facility and the Earth Science and Remote Sensing Unit, Johnson Space Center. The image was taken by a member of the Expedition 45 crew. The image has been cropped and enhanced to improve contrast, and lens artifacts have been removed. The International Space Station Program supports the laboratory as part of the ISS National Lab to help astronauts take pictures of Earth that will be of the greatest value to scientists and the public, and to make those images freely available on the Internet. Additional images taken by astronauts and cosmonauts can be viewed at the NASA/JSC Gateway to Astronaut Photography of Earth. Caption by M. Justin Wilkinson, Texas State U., Jacobs Contract at NASA-JSC. 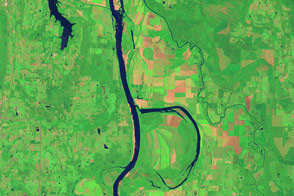