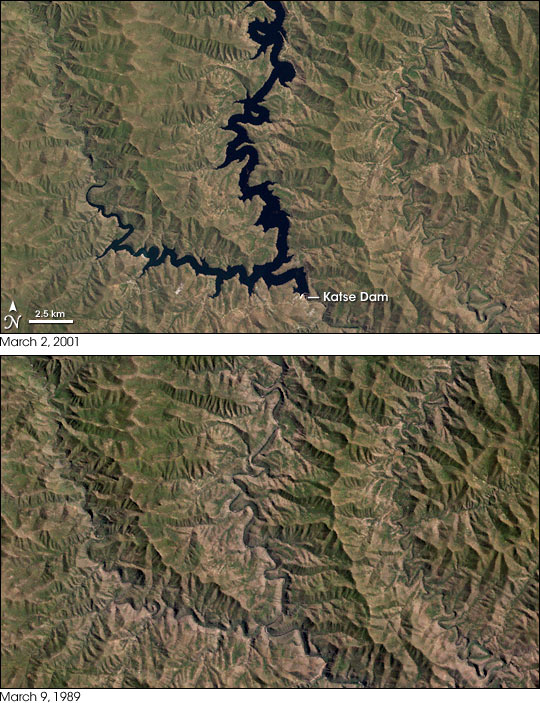 The industrial heart of South Africa is Gauteng Province, where the combined Johannesburg and Soweto cities form Africa’s most populous urban center. Like all such large cities, one of its critical needs is water. Rapid growth of the cities has outstripped the ability of the nearby Vaal River to supply the area’s needs. Since the 1950s, South Africa had considered the possibilities of diverting water from the Orange River basin in Lesotho (where the river is known as the Senqu) into the Vaal River. At the same time, Lesotho had been importing electricity from South Africa. During the 1980s, a scheme to fulfill both needs was formally created, named the Lesotho Highlands Water Project. The first stage of the project installed the Katse Dam across the Malibamatso River and a 45-kilometer-long tunnel to Muela, where hydroelectricity would be generated. When it was completed in May 1997, the 185-meter-tall Katse Dam was the largest in Africa. Good rains filled the reservoir to capacity in early 1998. The reservoir has stayed near full capacity since. Water flows to Muela and then through another tunnel to Clarens in South Africa, where it feeds into the Axel River, a tributary of the Vaal.

This photo-like image pair shows the area around the reservoir on March 2, 2001, observed by the Landsat 7 Enhanced Thematic Mapper Plus instrument, and the pre-construction scene observed by the Landsat 5 Thematic Mapper instrument on March 9, 1989. In the more recent image, the valley of the Malibamatso River is flooded, with the dam at around 95 percent of its full capacity. Most of the 38.5-square-kilometer surface of the lake is shown here. (All of it can be seen in the large image.) At just shy of two billion cubic meters capacity, it is similar in water volume to the huge Vaal Reservoir into which it now feeds, but with deep valleys filled with water, it has about 10 percent of the surface area of the Vaal water supply and thus suffers much less loss to water evaporation than its downstream cousin. As it filled, the weight of the water in the reservoir was sufficient to trigger a series of minor seismic events. The depth of the valleys can be partially appreciated by seeing them in the 1989 image before the reservoir filled.

The Lesotho Highlands Water Project has not been without its controversies. The project brought a steady income from water sales, provided electricity in surplus of the country’s needs, and led to construction of roads, bridges, and other needed infrastructure in Lesotho. South Africa has benefited from the supply of much-needed water for Gauteng Province’s growing population and industry. However, the flooding of the valleys displaced residents and inundated agricultural land, and although people were compensated, such transitions can nevertheless be socially disruptive. Considerable attention was paid in the construction to keeping water quality high not only for human consumption, but also to provide clean, unsilted water for wildlife downstream of the project. Still, the social and environmental impacts of the dam remain in question, even as the later phases of the water project continue. Eventually the entire project will include four major dams and a series of smaller water impoundments. It is projected to be completed in 2020.