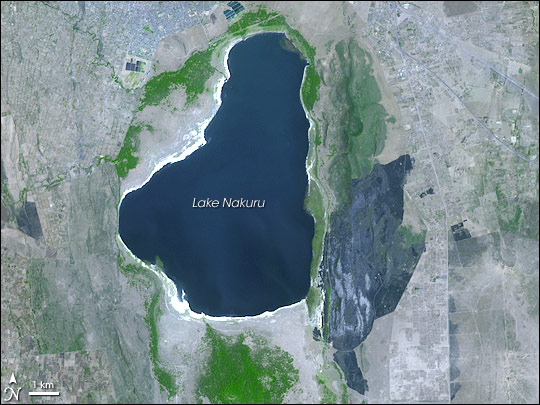 In late February 2008, Kenya’s Lake Nakuru National Park suffered a major blow when an accidental fire scorched a large section of the relatively small (188-square- kilometer) park. Located in central Kenya, the park is most famous for the flocks of flamingoes that congregate to graze on the cyanobacteria that thrive in the shallow, alkaline lake. But the surrounding marshes, woodlands, and savanna also provide habitat for some of Africa’s famous large mammals, including white and black rhinoceroses, leopards, giraffes and lions.

This image from the Advanced Spaceborne Thermal Emission and Reflection Radiometer (ASTER) on NASA’s Terra satellite shows the large burn scar left by the February fire. The burned area is the large charcoal-colored patch to the east-southeast of the lake. The loss of such a large area of vegetation, which provides both food and shelter, is bound to pose problems for the park’s wildlife. The remaining dense vegetation appears in patches of green, while sparsely vegetated areas appear tan. The city of Nakuru appears northwest of the lake.

NASA image by Jesse Allen, based on data from the USGS Land Processes Data Center. Caption by Rebecca Lindsey.