Inside the Bering Sea Superstorm 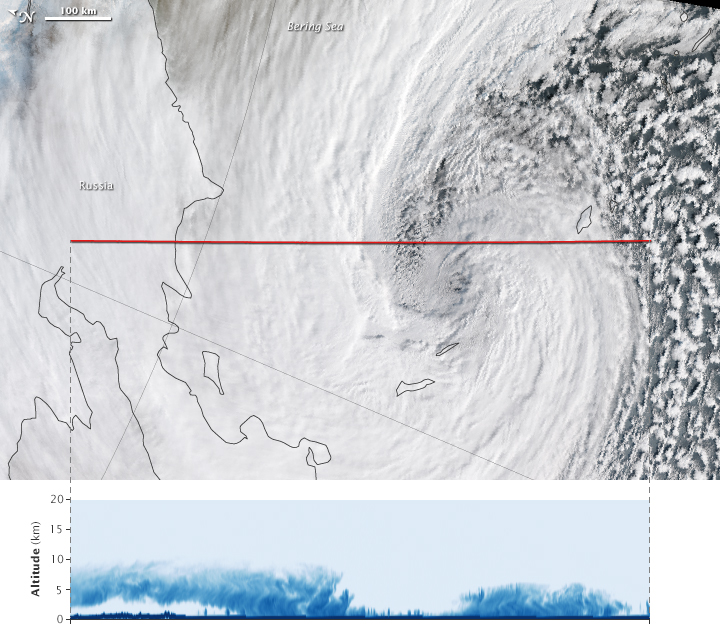 In early November 2014, a superstorm charged across the Bering Sea with record-low pressure, bringing high winds and waves to the region. It even triggered events leading to an extreme cold snap in the central United States. While scientists have a good handle on the processes that cause extratropical cyclones like this one to form, the details of cloud features embedded in these storms are not yet fully understood.

"Extratropical cyclones represent some of the largest and most powerful storm systems on Earth, and produce the majority of fresh water received at middle and high latitudes" said Derek Posselt of the University of Michigan. "Scientists are currently examining how clouds are not only caused by winter storms, but also feed back on the storm strength and life cycle."

One way that scientists study the cloud-storm relationship is by looking down from above with radar. Pulses of energy from radars are reflected from objects in the path of the radar beam. For example, the radar on NASA's CloudSat is designed specifically to detect the reflections from cloud droplets and ice particles. The more energy that the cloud reflects back to the radar, the more water and ice is contained in the cloud.

The Visible Infrared Imaging Radiometer Suite (VIIRS) on the Suomi NPP satellite captured this view of the Bering Sea event (top) at 0120 Universal Time on November 8, the day that it peaked in intensity as an extratropical storm. Note that the image has been rotated so that North is toward the left.

Seven minutes prior to acquisition of the VIIRS image, CloudSat flew over the storm and acquired a vertical profile. The satellite track is shown as a red line across the middle of the image. The lower image is a cross-section that shows what the storm would look like if it had been sliced near the middle and viewed from the side. Lighter blue colors correspond to smaller amounts of reflected energy: in this case, thin ice clouds. Deeper blues represent regions of thick clouds and precipitation.

According to Posselt, the profile captures the part of a winter storm that often contains the heaviest snowfall. Intense snow bands—elongated structures associated with areas of snowfall—show up on the left side of the profile as streaks of dark blue in the lower to middle portion of the cloud. These snow bands wrap around the storm, and also show up in the radar reflectivity on the right side of the profile.

In addition to the snow bands, small convective snow showers are visible in the profile under the higher clouds at left, and also in the center of the image between the two main regions of snowfall. These snow showers are very shallow, with cloud tops that stay below an altitude of about 2 kilometers (1.2 miles). Still, they can produce intense short-lived bursts of snow.

"In contrast to every other spaceborne radar, CloudSat enables us to see the details of the middle and upper portions of winter storm clouds, as well as the intense snow bands reaching the surface," Posselt said. "The development of intense small-scale snow bands within a much larger storm system is still a process that is not well understood."

Posselt and others are hopeful, however, that probing the details of these fine-scale features with CloudSat will help uncover new information about the Earth's hydrologic cycle.

NASA Earth Observatory image by Jesse Allen, using CloudSat FirstLook data provided courtesy of the CloudSat team at Colorado State University, and VIIRS data from the Suomi National Polar-orbiting Partnership. Suomi NPP is the result of a partnership between NASA, the National Oceanic and Atmospheric Administration, and the Department of Defense. Caption by Kathryn Hansen with image interpretation by Derek Posselt.

A slice through the storm clouds depicts areas of intense snowfall. 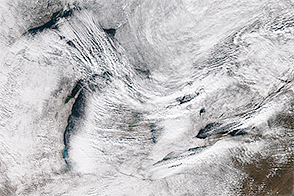 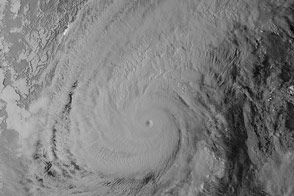