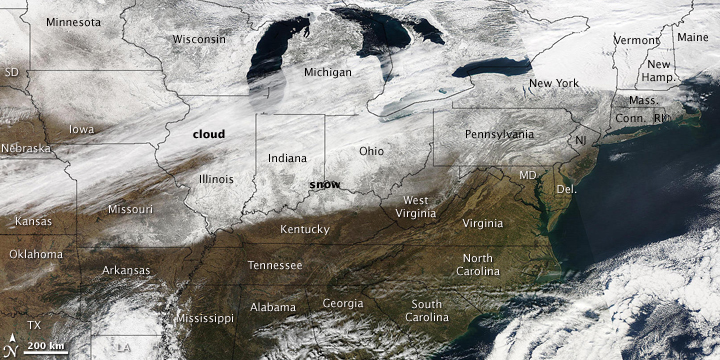 Nearly a week after a winter storm coated a broad swath of the United States with ice and snow, the clouds cleared enough to provide this photo-like view of the winter landscape. The storm, which struck on January 27, 2009, cut off electricity to millions, and by February 2, thousands in Kentucky, Missouri, Illinois, and Arkansas were still without power, said USA Today. Kentucky governor Steve Beshear called the storm, "the biggest natural disaster that this state has ever experienced in modern history," reported CNN.

This image, captured by the Moderate Resolution Imaging Spectroradiometer (MODIS) on NASA’s Aqua satellite on February 1, 2009, shows the wide area impacted by the storm. The storm’s visible path begins with a wispy line of snow through central Oklahoma and traces north in a solid line from Missouri to Maine. A line of clouds runs parallel to the storm’s snowy track, covering parts of the North. Impressive though this swath of snow is, it may not represent the full extent of the storm. Ice is clear, and some may coat the land south of the snow.