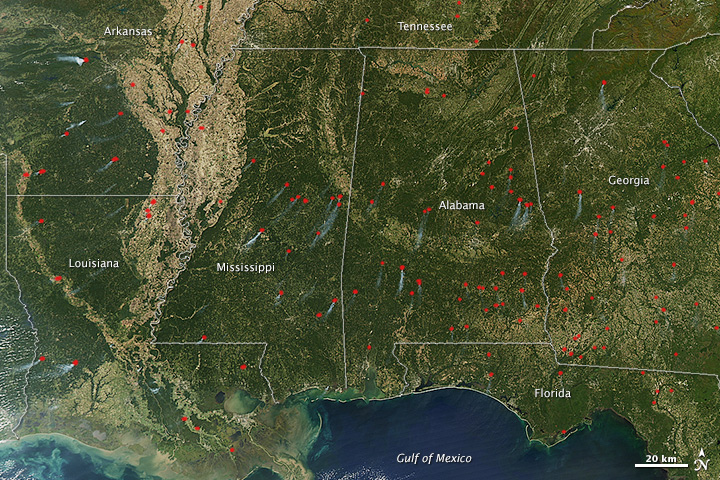 Large wildfires that threaten people and property—such as the September 2014 King Fire in California—capture the attention of the American public and media. They are unpredictable and menacing and have an outsized influence on our impressions of fire and smoke.

Less prominent in the public eye are the myriad smaller fires that are set for managing cropland or forested areas. However, recent research by Hsiao-Wen Lin of University of California–Irvine found that prescribed burns and cropland fires accounted for 77 percent of all fires detected in the United States by NASA's Terra satellite between 2001–2010. These managed fire types can contribute significantly to emissions of carbon and other pollutants, particularly in the South and Southeast.

On October 22, 2014, the Moderate Resolution Imaging Spectroradiometer (MODIS) on NASA's Aqua satellite acquired this image of fires across the U.S. Southeast. Actively burning areas, detected by the thermal bands on MODIS, are outlined in red.

Most of the fires in this image are likely prescribed, according to Doug Morton of NASA's Goddard Space Flight Center. October is the right time and location to see burning in preparation for planting in the U.S. Southeast. The cycle includes planting of seedlings, growing and harvesting trees, and then the burning of branches and debris—collectively called slash—that are left on the ground. The burning returns the land to bare soil that can be planted with new seedlings.

There are other areas in the world where trees grow faster, but the U.S. Southeast has more plantation forestry than anywhere else. It is also one of the most dynamic forest landscapes, Morton said. The evidence lies in a high-resolution, global map of forest cover change that was released in 2013 by researchers led by Matthew Hansen of University of Maryland. In Georgia, northern Florida, and other southern states, landowners harvest trees for timber and quickly plant their replacements—change that's apparent in the map of forest cover change.

The timing and location of October fires in the U.S. Southeast provide a clue about their source.