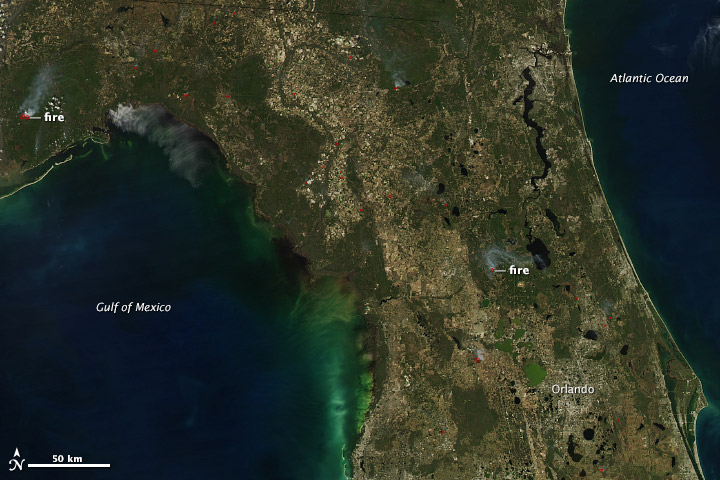 In the United States, “fire” is synonymous with large wildfires burning in western forests, but more than half of all fires in the United States are in the Southeast. Several fires were burning on February 17, 2014, when the Moderate Resolution Imaging Spectroradiometer (MODIS) on NASA’s Aqua satellite acquired this image. The fires are outlined in red.

It’s impossible to tell from the image alone what is burning or how the fires started. The southeastern United States is a highly managed landscape, and fire is an important management tool. State and federal forest services and industrial foresters use fire to thin tree stands. Sugarcane producers burn fields to strip away unneeded leaves before harvest in the winter. Farmers raising row crops such as soy, cotton, or rice burn residual stubble after harvest and before replanting, typically in the summer and fall.

These fires may also be prescribed fires in farms, grasslands, swamps, or forests. Florida is prone to fire, and so the Florida Forest Service promotes the use of prescribed fire to cut down on wildfire risk. At the end of January 2014, the agency had authorized more than 1,600 prescribed burn managers to burn 2.3 million acres of land annually—one of the most extensive prescribed burning programs in the nation. This means that it is likely that at least some of the fires seen in the image are prescribed burns.

The Florida Forest Service also reported a number of wildfires burning throughout the state. According to local news reports, a warm, wet summer spurred plant growth. The plants dried out as a result of freezing temperatures during the winter, leaving plenty of fuel for fires.