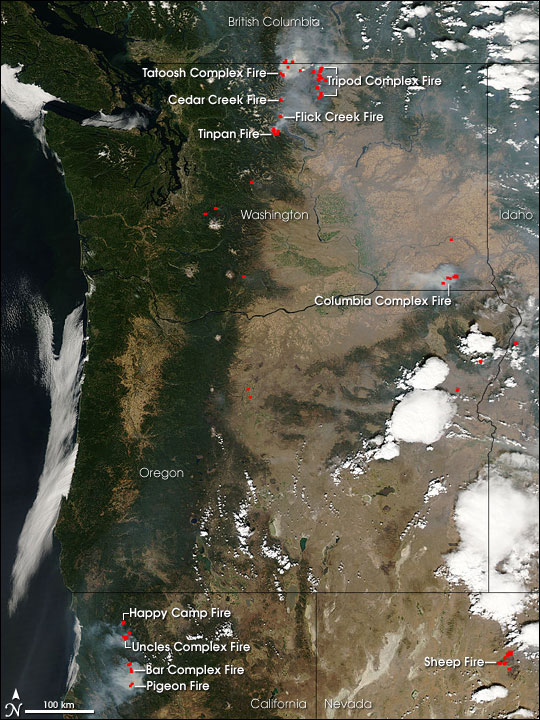 Clear skies over most of the western United States on the afternoon of September 6, 2006, revealed numerous large fires burning in several states. This image of the area from the Moderate Resolution Imaging Spectroradiometer (MODIS) on NASA’s Aqua satellite shows places where the sensor detected actively burning fires marked in red. Numerous fires were burning in the mountains of north-central Washington, including the Tripod Complex Fire, which had grown to nearly 165,000 acres, according to the September 7 report from the National Interagency Fire Center. In the state’s southeastern corner, another large fire, the Columbia Complex, had grown to just over 96,000 acres.

In northern Nevada, a season of heightened fire activity continued with the Sheep Fire, which was over 129,000 acres as of September 7. (To the northeast, clouds hide the 80,000-acre Amazon Fire, which was visible in the previous day’s image.) Meanwhile, a line of fires stretches across the mountains of northern California. The Pigeon Fire and the Bar Complex were both burning in the Shasta-Trinity National Forest. The Pigeon Fire was smaller—5,300 acres—but extremely active, forcing evacuations and road closures. The Bar Complex was nearly 33,000 acres and threatening structures and watersheds. Previous images of these fires are also available in the Fires in Northern California event.

The high-resolution image provided above has a spatial resolution of 250 meters per pixel. The MODIS Rapid Response Team provides daily images of the area in a variety of resolutions and formats, including an infrared-enhanced version that highlights burned areas.