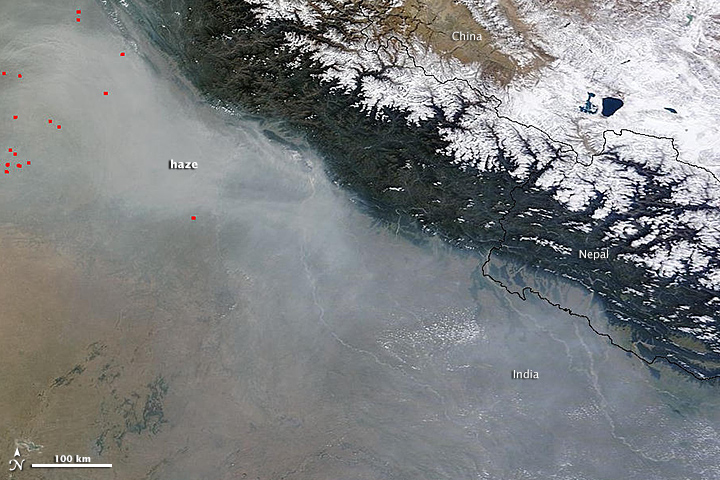 In October 2014, India’s Central Pollution Control Board (CPCB) released a proposal for a new air quality index that would be used to quantify and communicate the severity of haze outbreaks. The new air quality index would synthesize levels of various pollutants—including PM2.5, PM10, nitrogen oxides, sulfur dioxide, ozone, and carbon monoxide—into one easy-to-understand number and warning color that would be used to alert the public about health risks during outbreaks.

While the proposed air quality index is still in the planning stages, it might have been useful in late October 2014. Since October 22, the Moderate Resolution Imaging Spectroradiometers (MODIS) on the Aqua and Terra satellites have observed an increasingly thick layer of haze hovering over northern India. The image above shows the area as observed by Terra on October 27, 2014. Red boxes show where MODIS detected fires.

Rice paddies and wheat and vegetable fields are commonly cleared with fire in the Punjab in October and November, so smoke from such fires are likely an important source of the haze. The smoke combined with routine urban and industrial pollution from cities in northern India to produce the pall of gray. Smoke from fireworks associated with Diwali celebrations also may have contributed to the buildup of haze, according to news reports from several cities.

Normally, air pollution dissipates relatively quickly because pollutants disperse as warm air near the surface rises. In this case, a temperature inversion associated with a storm system in northern Pakistan and India has helped hold the haze in place by trapping cool air under a layer of warmer air.

India’s government anticipates that an air quality index will help citizens minimize their exposure to hazardous pollutants during haze outbreaks. “The air quality index will prove to be a major initiative for improving air quality in urban areas, as it would enhance public awareness and involvement, and would create a competitive environment among cities to take steps for air pollution mitigation,” noted Susheet Kumar, chairman of India’s CPCB, while introducing the proposal. The efforts comes after the World Health Organization and Yale University recently listed India as having some of the most severe air pollution in the world. 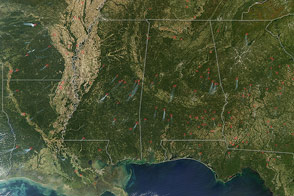