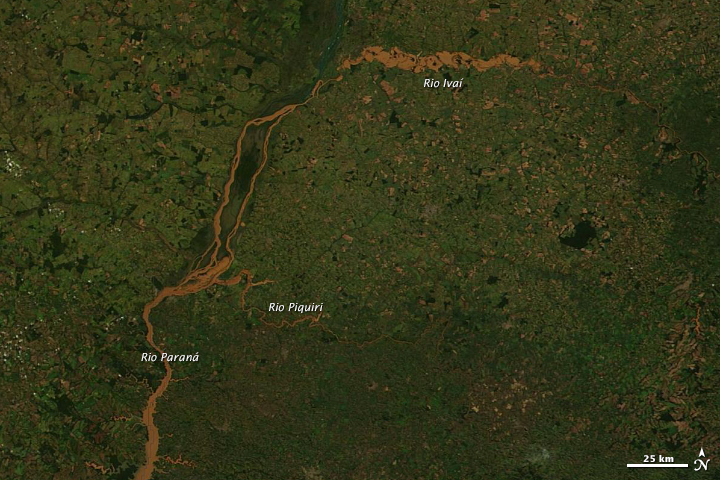 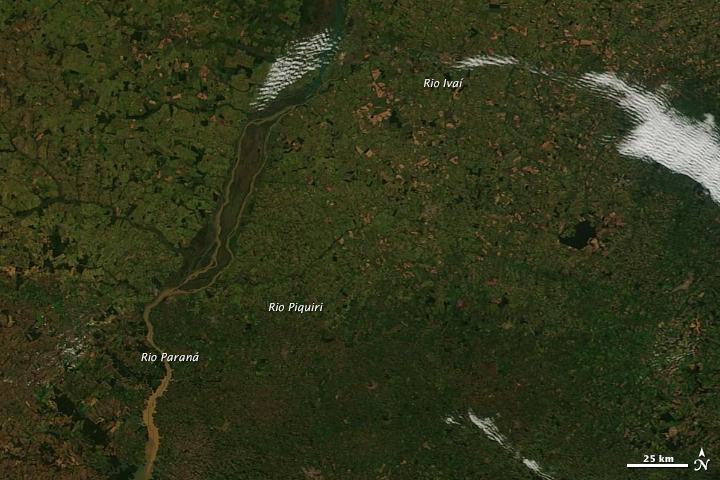 Torrential rain brought deadly floods to southern Brazil and Paraguay in June 2014. The top image, acquired by the Moderate Resolution Imaging Spectroradiometer (MODIS) on NASA’s Terra satellite on June 11, 2014, shows flooding in the Paraná River system in Brazil’s Paraná state. The Ivaí, Piquiri, and Paraná rivers are all swollen and muddy from runoff. The lower image, acquired by Terra MODIS on June 12, 2012, shows the river system in non-flood conditions. Turn on the image comparison tool to see the extent of the flooding.

The floods came after four days of heavy rain. Skies were sunny on June 11 and 12, but more rain was in the forecast for the weekend, said Simepar, the meteorological agency of the Paraná state. The agency expected water levels to remain high throughout the weekend of June 14-15.

The floods have killed 10 people in Paraná, and forced a state of emergency in 130 Brazilian cities, reported Reuters. Among those cities is Curitiba, one of the World Cup host cities. The floods also closed parts of the popular tourist destination, Iguazu Falls, which is immediately south of the area shown in these images. Downstream in Paraguay, the floods are affecting more than 31,000 families, with 1,600 families evacuated from their homes.