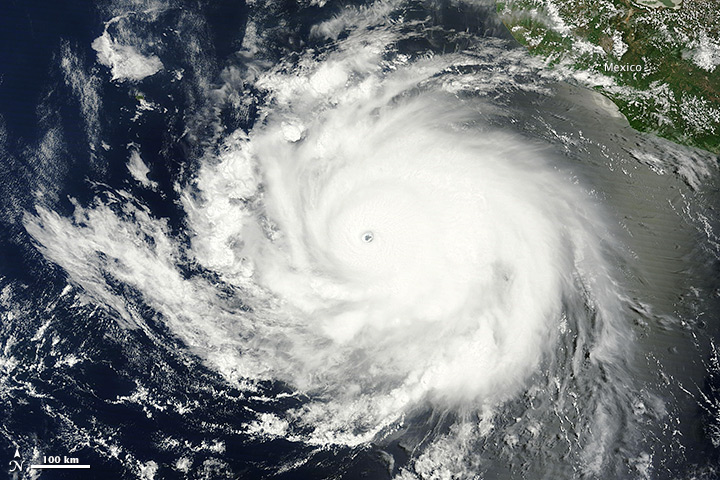 When the Moderate Resolution Imaging Spectroradiometer (MODIS) on NASA’s Aqua satellite acquired this image at 10:40 a.m. local time (17:40 Universal Time) on June 12, 2014, Tropical Cyclone Cristina was churning over the eastern Pacific Ocean off the coast of Mexico. The storm had maximum sustained winds near 240 kilometers (150 miles) per hour, making it the equivalent of a category 4 hurricane. The storm was moving west-northwest at a speed of 13 kilometers (8 miles) per hour.

Later on June 12, Cristina began to weaken. By the morning of June 13, the storm’s maximum sustained winds had dropped to 155 kilometers (100 miles) per hour. Forecasters expect Cristina to continue weakening as it encounters cooler sea surface temperatures and more hostile wind conditions in the coming days. The storm should continue moving northwestward for about 24 hours, then turn to the west-northwest after about 36 hours. It is not expected to make landfall.

In its annual outlook for the hurricane season, the National Oceanic and Atmospheric Administration’s (NOAA’s) Climate Prediction Center predicted 14 to 20 tropical cyclones in the eastern Pacific this season, a near-normal to above-normal season. The key factor behind the outlook is the likely development of El Niño. El Niño decreases vertical wind shear over the eastern tropical Pacific, making it easier for storms to develop. 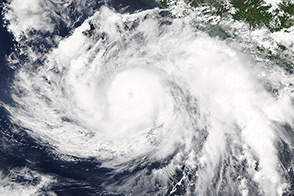 Hurricane Cristina churned off the western coast of Mexico when the Aqua satellite acquired this image on June 11, 2014.