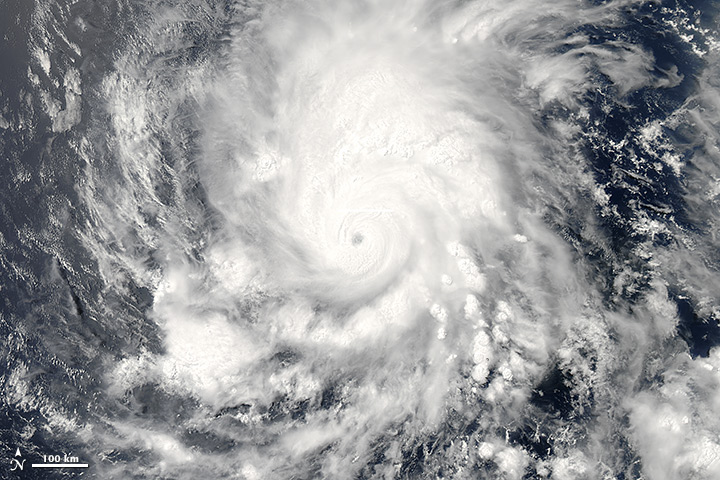 NASA’s Aqua satellite captured this view of Amanda—the first named storm of the 2014 hurricane season in the Americas—southwest of Manzanillo, Mexico, on May 25, 2014. The image was acquired by the Moderate Resolution Imaging Spectroradiometer (MODIS) at 21:00 Universal Time (2 p.m. Pacific Daylight Time).

At the time of the image, the Category 4 storm was in the eastern Pacific moving north-northwest at a speed of about 7 kilometers (5 miles) per hour. The storm’s winds peaked at 250 kilometers (155 miles) per hour, making it the strongest May hurricane on record. The previous record holder was Hurricane Adolph, which had winds of 235 kilometers (145 miles) per hour on May 29, 2001. Forecasters expect Amanda to weaken and become a tropical storm over the next few days.

Amanda attained tropical storm status on May 23. That’s earlier than usual for the first hurricane of the year, according to Jeff Masters, Weather Underground’s director of meteorology. On average, the first tropical storm of the season arrives in the Eastern Pacific by June 10, and the first hurricane by June 26. For more details about when storms typically arrive, see this overview from the National Hurricane Center.

In its annual outlook for the hurricane season, the National Oceanic and Atmospheric Administration’s (NOAA’s) Climate Prediction Center predicted 14 to 20 tropical cyclones in the eastern Pacific this season, a near-normal to above-normal season. NOAA meteorologists expect a normal or above-normal season in the central Pacific. In contrast, they are calling for a near-normal or below-normal Atlantic hurricane season.

The possibility that El Niño may develop during the 2014 hurricane season is a factor in all three regions. El Niño decreases the vertical wind shear over the tropical central and eastern Pacific, favoring the development of more and stronger tropical cyclones. In contrast, it causes stronger wind shear in the Atlantic, which would reduce the number and intensity of storms.