Parting the Sea to Save Venice 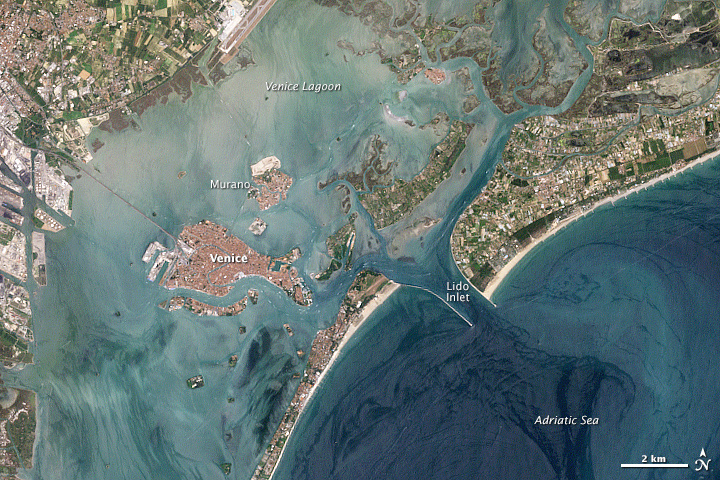 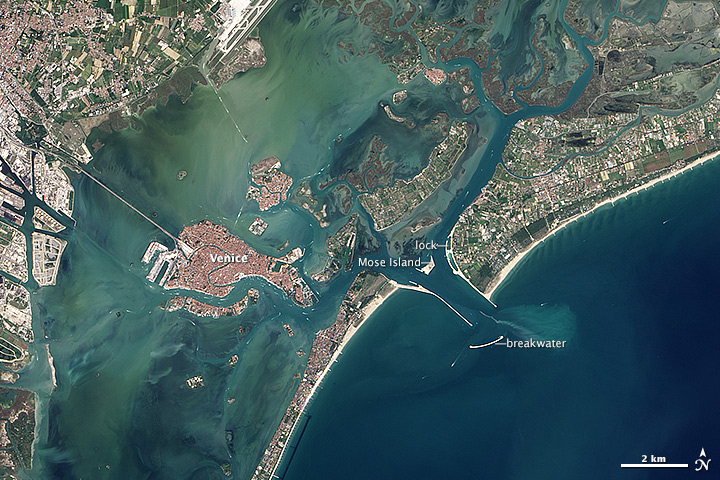 The sea has protected Venice since the fifth century, when people moved to the fish-shaped islands of Rialto for safety from mainland invaders. Over the next thirteen centuries, the seafaring city-state grew in power and strength. The art, architecture, and history amassed in the small “floating city” of Venice has earned it a place on the UNESCO list of World Heritage Sites.

But the tide has turned, and the sea that once protected Venice now threatens it. Nestled in the Venetian Lagoon, the 118 low-lying islands of modern-day Venice are separated from the Adriatic Sea by a 45-kilometer (28-mile) chain of barrier islands. The Adriatic connects to the lagoon via three inlets—the Lido, Malamocco, and Chioggia.

The sea now imperils Venice because of three conflated issues: groundwater pumping and offshore gas drilling have caused the city to subside; sea level has been rising; and natural tidal protections like mudflats and marshes have been disrupted over the past century. River courses have been made rigid, inlets have been widened, and the lagoon has been dredged to create shipping channels; adjustments to make boating and shipping safer have helped make the land more vulnerable.

The city now regularly experiences Acqua Alta, or high water, when the tide inundates the streets and squares, menaces the historic architecture, and forces citizens to don galoshes. In 1900, such events occurred ten times per year. Now Acqua Alta, happens more than 60 times per year.

In November 1966, two days of heavy rain coincided with high tides, a static low-pressure system, and a severe Sirocco wind that drove 2 meters (six feet) of water into Venice. The flood destroyed millions of dollars of artwork, wrecked businesses, and left thousands of people homeless. The event prompted many people to think that the city was doomed unless some sort of intervention was made.

After decades of debate, construction began in 2003 on a major engineering project called MOSE. The project acronym stands for MOdulo Sperimentale Elettromeccanico (Experimental Electromechanical Module) and alludes to the parting of the Red Sea by Moses. The concept behind MOSE is to temporarily separate the Venetian Lagoon from the Adriatic Sea when unusually high tides occur. This is done through a series of 78 gates that seal the lagoon’s three inlets.

Each gate is approximately 30 meters high (98 feet), 20 meters wide (65 feet), 5 meters thick (16 feet), and weighs 300 tons. During normal tides, each of the massive gates lie on a concrete foundation on the seabed, with one end hinged to steel and concrete pilings. When high tide exceeds 87 centimeters (34 inches) above mean sea level, compressed air is pumped into the gates until they slowly pivot upwards. Raising the gates takes about one hour. In a high-tide event, the gates will likely remain in place for four to five hours until the waters subside; then they will be filled with water and lowered back to their seabed berths.

The natural-color Landsat images above show some of the MOSE engineering efforts that are visible above the water line near the Lido Inlet. The top image was acquired on June 20, 2000, by the Enhanced Thematic Mapper+ on Landsat 7. The second image, from the Operational Land Imager on Landsat 8, was collected on September 4, 2013. Turn on the image comparison tool to make the changes easier to see. (Note that Landsat 8 has a greater dynamic range than Landsat 7, so the Landsat 8 image is crisper the Landsat 7 image.)

In 2013, a curved breakwater stands just south of the inlet’s south jetty. On the lagoon side of the Lido Inlet, a new manmade island appears; it houses the buildings and plants that operate the gates, which are underwater in two arrays on either side of the island. On the north side of the inlet, a manmade harbor for small vessels includes a small lock system that allows boats to pass from the lagoon to the sea when the gates are raised.

Since the beginning of MOSE construction, five million cubic meters of sediment have been excavated from areas adjacent to the lagoon’s three inlets. The $8.8 billion dollar project has encountered some scientific, environmental, and political objections about disrupting the natural water exchange between the lagoon and Adriatic.

The Lido Inlet gates were successfully tested on October 12, 2013, and operators aim to have the MOSE system fully functional by 2016.

The waters that once protected Venice now threaten it. A complex engineering project is being installed to beat back the tide.