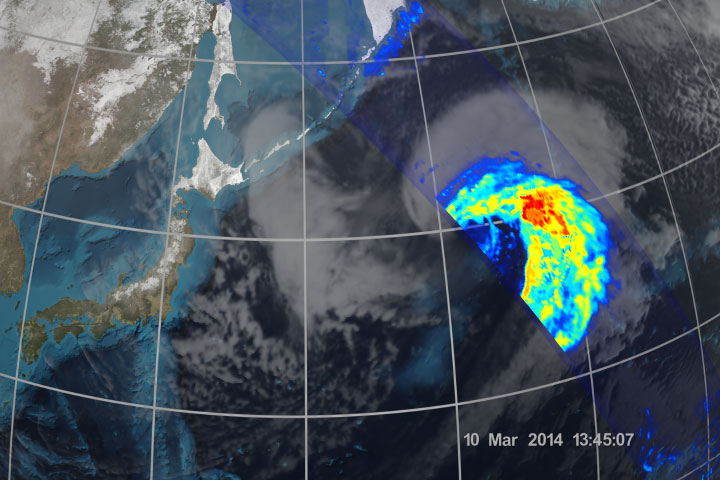 The Japan Aerospace Exploration Agency (JAXA) and NASA have released the first images from their new Earth-observing satellite, the Global Precipitation Measurement (GPM) Core Observatory. Launched on February 27, 2014, the new mission will study rain and snow from the tropics to the southern edge of the polar regions. GPM also will anchor an international network of satellites that can make global precipitation observations roughly every three hours.

”It was really exciting to see this high-quality GPM data for the first time. I knew we had entered a new era in measuring precipitation from space,“ said project scientist Gail Skofronick-Jackson. ”We can now measure global precipitation of all types, from light drizzle to heavy downpours to falling snow.“

The image above comes from the GPM Microwave Imager (GMI) and shows precipitation across a broad swath of the atmosphere. The colors depict the rain rate; red areas indicate heavy rainfall, while yellow and blue indicate less intense rainfall. The blue areas in the upper left indicate falling snow. GPM has the first satellite sensors specifically designed to measure falling snow and light rainfall.

Extratropical cyclones occur when masses of warm air collide with masses of cold air in the mid-latitudes (beyond the tropics). These storm systems can produce rain, snow, ice, high winds, and severe weather. In the image above, the warm front ahead of the center of the cyclone shows a broad area of precipitation falling as rain, with a narrower band of precipitation associated with the cold front trailing to the southwest. Snow occurs in the northern reaches of the storm.

The two images below show a cross-section of the storm from GPM’s Dual-frequency Precipitation Radar (DPR). Heavy to moderate rain is measured by the Ku-band radar frequency, shown in the top image; lighter rain and snow is measured by the Ka-band frequency and shown in the lower image. The left side of the cross-section corresponds with the northwestern edge of the storm. The heaviest precipitation is on the right, which aligns with the high rain rates seen on the south side of the storm in the GMI image.

While GPM’s predecessor, the Tropical Rainfall Measuring Mission (TRMM) satellite carried the first space-based precipitation radar, it was designed to monitor heavy to moderate rain, not snow. Furthermore, TRMM’s orbit keeps it over the tropics (35° North to 35° South), where the satellite cannot observe snow-producing extratropical cyclones. GPM’s orbit takes it from 65° North to 65° South. The storm shown above stretches from about 42° North to 38° North, outside of TRMM’s range.

These first GPM Core Observatory images were acquired during the check-out and calibration phase, when mission controllers at the NASA Goddard Mission Operations Center will make sure the spacecraft and its science instruments are healthy and functioning as expected. The engineering team calibrates the sensors, and Goddard's team at the Precipitation Processing System verifies the accuracy of the data. Science data from the GPM Core Observatory will be validated and released to the public within six months after launch. They will be distributed for free online.