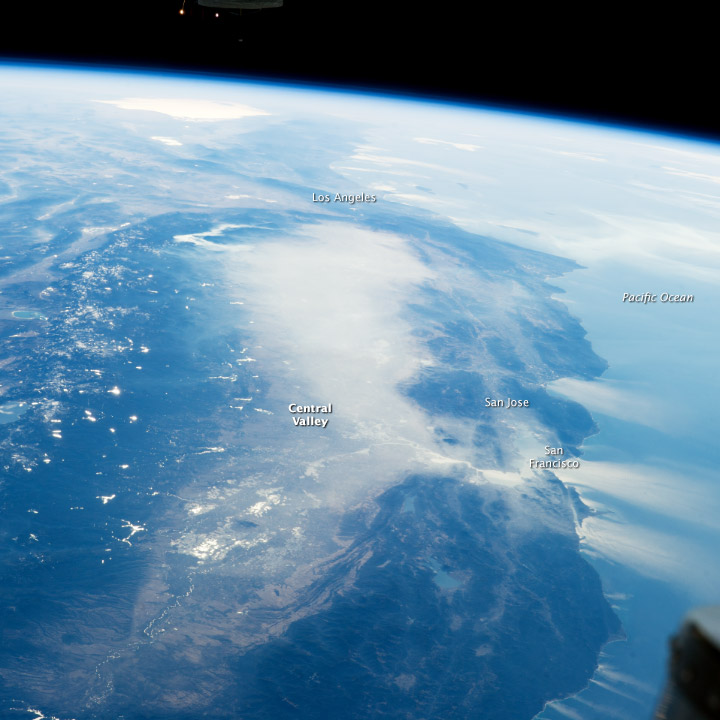 On January 17, 2014, astronauts on the International Space Station looked down on a film of white spread over the southern half of California’s Central Valley. Many winter days in the Central Valley dawn with dense white Tule fog, which forms on clear nights after winter rain storms when the ground is moist. The ground cools rapidly, chilling the air enough to condense water vapor into ground-level fog. Contained by the Coastal Range on the west (right in this image) and the Sierra Nevada on the east, this fog can linger in the valley for many days.

But January 17 was not one of those days. “Because of the drought, we have had a very limited fog season this year,” says Paul Iñiguez, a meteorologist at the San Joaquin Valley/Hanford office of the National Weather Service. “Poor to very poor air quality has been a problem this winter due to a lack of rain and stagnant air.”

Looking south across California, astronauts caught this oblique view of haze. Air quality levels ranged from unhealthy to very unhealthy throughout the day. Fine particulate pollution (PM 2.5) maxed out at 74 micrograms per cubic meter overnight, according to the Jan Joaquin Valley Air Pollution Control District. The Environmental Protection Agency recommends a limit of 35 micrograms per cubic meter in a 24-hour period. In many parts of the United States, fine aerosol particles are the primary cause of poor visibility.

Astronaut photograph ISS038-E-32446 was acquired on January 17, 2014, with a Nikon D3S digital camera using a 70 millimeter lens, and is provided by the ISS Crew Earth Observations Facility and the Earth Science and Remote Sensing Unit, Johnson Space Center. The image was taken by the Expedition 38 crew. It has been cropped and enhanced to improve contrast, and lens artifacts have been removed. The International Space Station Program supports the laboratory as part of the ISS National Lab to help astronauts take pictures of Earth that will be of the greatest value to scientists and the public, and to make those images freely available on the Internet. Additional images taken by astronauts and cosmonauts can be viewed at the NASA/JSC Gateway to Astronaut Photography of Earth. Caption by Holli Riebeek.