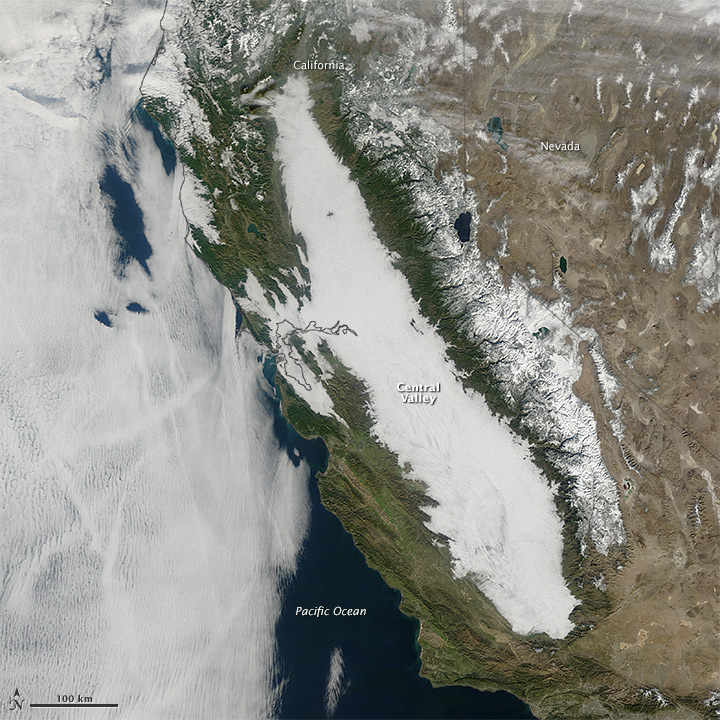 From time to time, in the wake of winter rain, dense fog fills the wide valley between California’s Sierra Nevada and Coastal Range. Called Tule fog, the phenomenon is as much a part of winter in the Central Valley as snow is in the mountain. In recent years, however, the fog has come less often. In fact, since 1981 the number of fog days between November and February has decreased by 46 percent, according to a recent study. The decrease is bad news for California’s fruit and nut farmers.

This image, acquired on January 17, 2011, by the Moderate Resolution Imaging Spectroradiometer (MODIS) on NASA’s Terra satellite, shows one of the more recent valley fog events. (Drought has limited the number of fog events since 2012.) University of California–Berkeley researchers Dennis Baldocchi and Eric Waller used images from MODIS and from NOAA’s advanced very high resolution radiometer (AVHRR) to count the number of fog days since 1981. They found a downward trend.

Baldocchi and Waller set out to study the fog events as an indicator of winter temperatures across the Central Valley. Fog forms on cold winter nights after rain, when the air near the ground is moist with water evaporating out of the soil. When temperatures dip low enough, the moist air condenses into fog. Fewer fog days occur when temperatures are warmer or conditions are drier.

The fog is important to California’s crops because fruit and nut trees, like people, need sufficient rest before they can be their most productive. They get that rest in the winter when cold temperatures—between 0° and 7° Celsius (32° and 45° F)—bring on a dormant period. Fewer fog days corresponds with fewer cold days, and other studies have confirmed that the trees are now being exposed to hundreds fewer cold hours compared to 1982.

NASA Earth Observatory image by Jesse Allen with data from the Land Atmosphere Near real-time Capability for EOS (LANCE). Caption by Holli Riebeek.